Love of the Sea

Jul 01 Posted by Dawn Swimmer in About

For as long as I can remember I've loved the water and especially the ocean. I don't remember the first time I saw the sea but it must have been when I was about 2 or 3 years old on a family vacation in Florida. Warm ocean water, collecting sand dollars, sunburn, running in the little waves.

When I was about 4, a gentle swim coach taught me how to put my face in the water and blow bubbles. We were at the side of the pool and she was encouraging me to put my face in, hold my breath, make bubbles and turn my head to the side. Maybe it was the fun of making bubbles come out of my nose or the small sense of achievement I experienced but for some reason it became a deeply embedded happy memory of my childhood linking the water, accomplishment of a skill, fun and a good feeling of learning and sharing with another person. These are gifts being in the water have always given me one way or another. 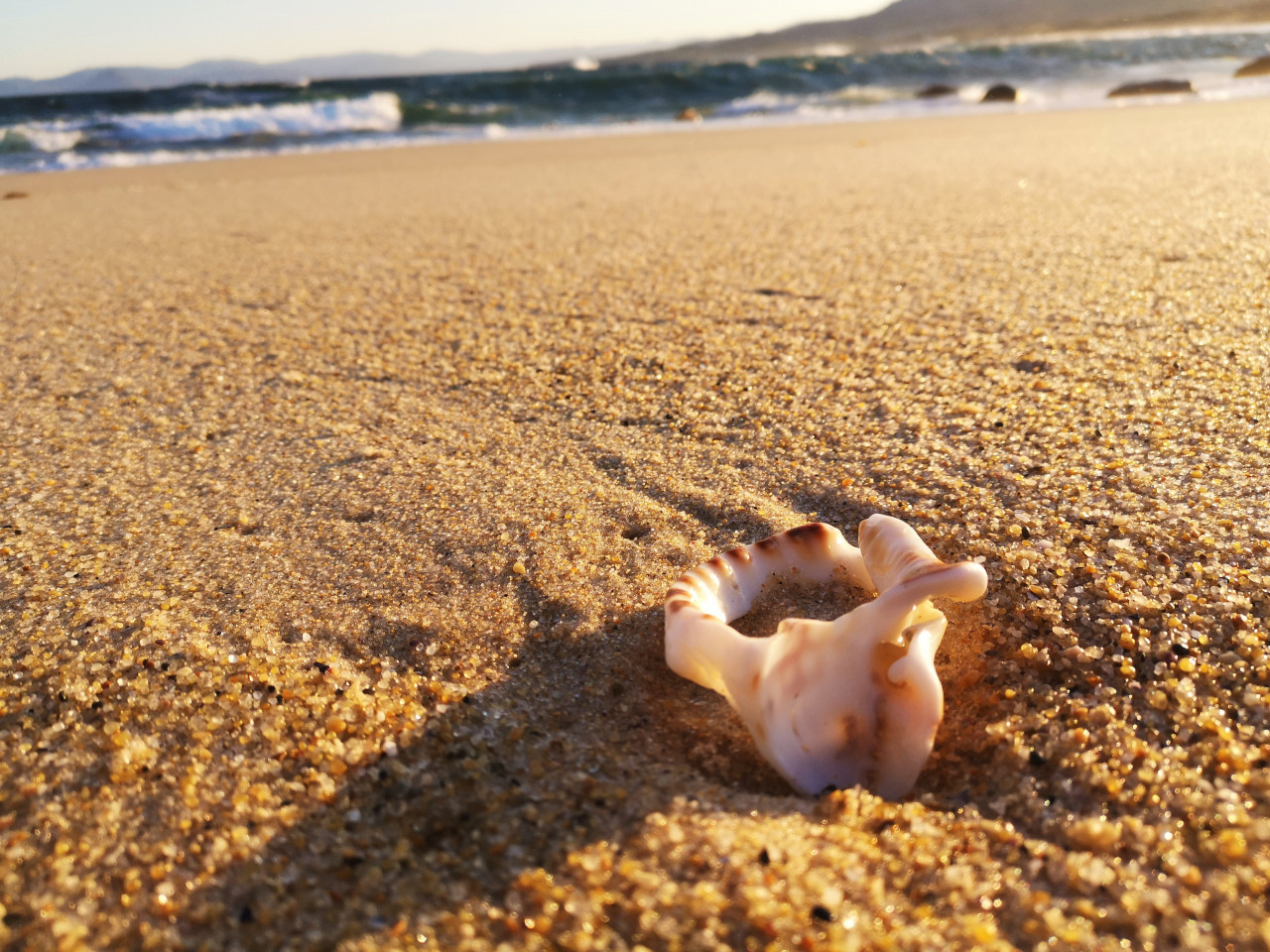 I don't remember further learning, classes and I never joined a swim team. But I loved that pool and the people there. I just remember from there on out being a fish and adoring the water. We moved from Michigan to California when I was about 7 and a highlight was having a pool. I lived in that pool during summer. Every summer my blond hair would take on green chlorine highlights. Floating, playing, splashing, swimming, pretending to be a mermaid, standing on my hands, holding my breath underwater, tea parties at the bottom of the pool, synchronized swimming attempts, twirling, diving down and soaring back up, underwater somersaults, self-taught strokes, butt bouncers with my siblings and friends, and on and on and on. This was the era of the movie Jaws and I loved to terrify myself imagining the 'great white' coming out of the pool's drain in the deep end between visions of a severed leg floating to the bottom. Water signified joyful activity, well-being, lightness, flow, and intense pleasurable sensations. As a kid I never associated water with competition, trial or extended effort.

Moving to California meant that the ocean was much closer than Michigan but still at least an hour away. We lived near San Francisco, on the other side of the Berkeley Hills, and even though I could never see the ocean I could often feel its effects as the fog would move into the SF Bay sending its cooling tendrils over the hills to gratefully bathe our hotter clime in fresh coolness. Ah... we would say, the fog has finally come. It was the ocean. 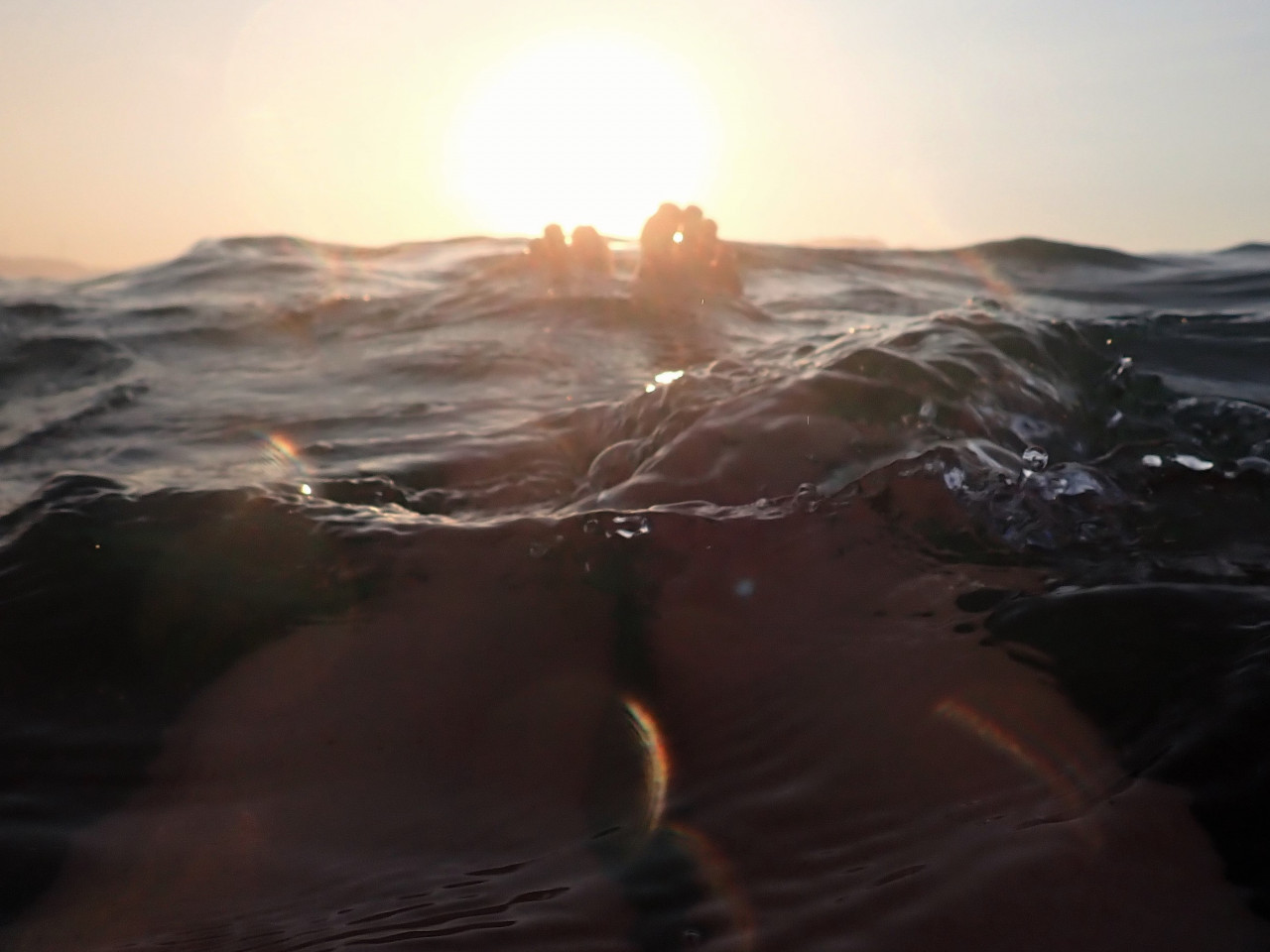 Aligning with the sun floating in the waves

Going to the beach was a spectacular highlight for me and we might go a couple times a year. I also fell in love with Jacques Cousteau's books and TV documentaries on the ocean and imagined myself going around the world discovering the mysteries of the sea. I dreamed of becoming an oceanographer or a marine biologist. When I was 16, and got my driver's license, the first thing I did was to become SCUBA certified in a nearby town. The teacher and I hit it off and, because it came naturally to me, I became his assistant in classes and on a couple of check-out dives in Monterey Bay. I also became a water safety instructor and lifeguard around the same time and finally learned how to properly do some of the strokes!

When I went to college I chose a university close to the ocean and I believed I would study marine sciences but in the end I didn't. The constant presence of the ocean became a great source of solace and pleasure. One of my dorm mates was a surfer from southern California and she tried to teach me about riding the waves. I continued to SCUBA dive, took swim conditioning classes, learned some more about technique and swam in the ocean whenever possible.

Despite having no proper training in the water people always told me that I moved well. It was something instinctual, a sense of flow that was necessary to move fluidly. Flow don't fight. The more you resist the medium, the less graceful is your stroke. I always thought that if I could move through life like I move through the water, then everything would be much easier. 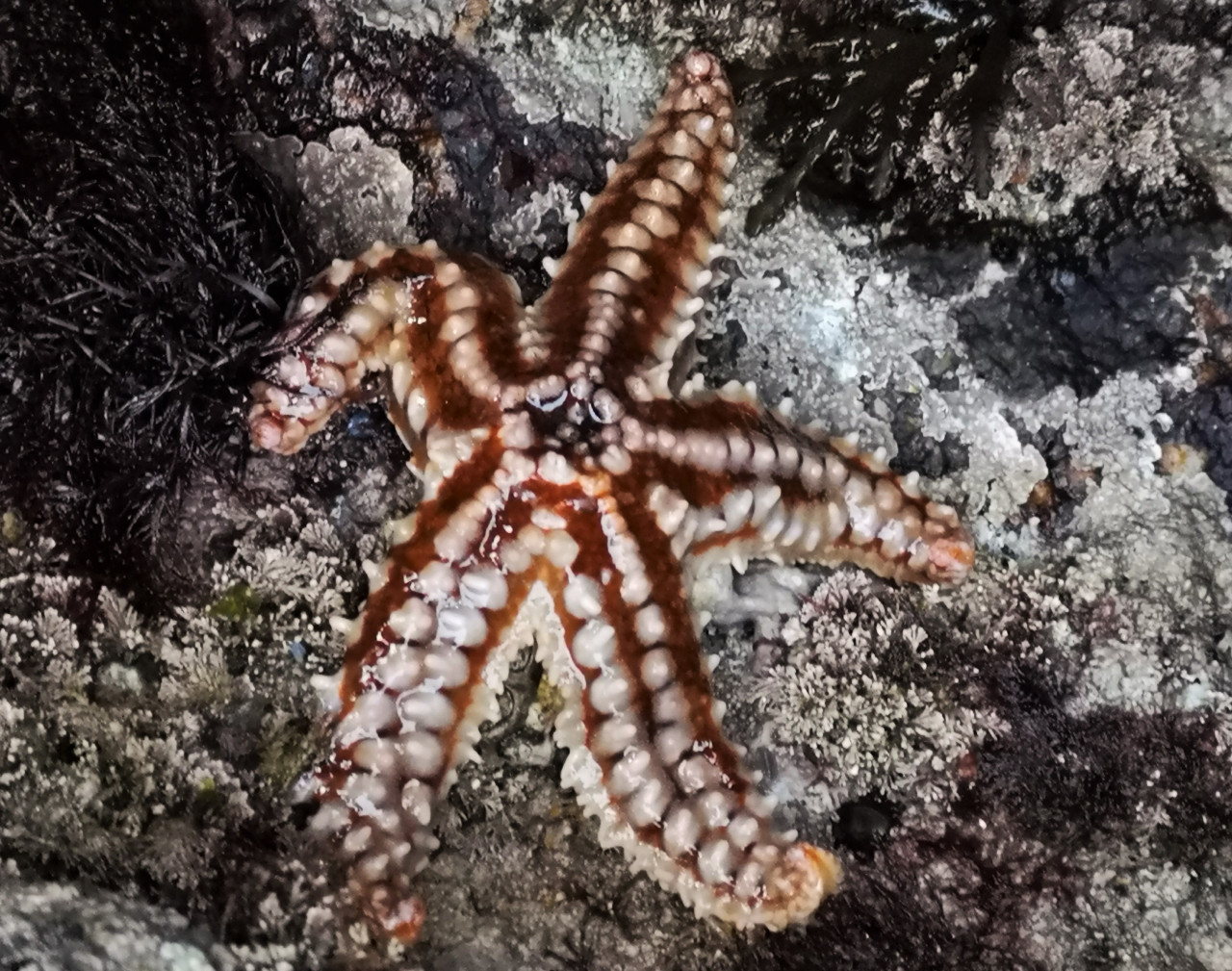 The ocean reveals its treasures at low tide.

Life evolved and swimming was always there. Sometimes with a long hiatus and then a return when circumstances drew me back one way or another to the water. In my mid-20s I participated in the only swim event I ever entered before turning 49: the exciting and challenging open water swim in San Francisco Bay called the SharkFest. Starting from notorious Alcatraz Island, the swimmers leap into the water by the Rock and swim back through the tough currents to the city. That planted a seed which took long to germinate but finally gave fruit.

It's not an accident that I chose with my partner to build a house and form a family in a rural area next to the ocean. One of my lifetime dreams was to live by the sea, to be able to hear the crashing waves, observe the complexity, the power and beauty of the ocean every single day. The sea calls my soul and my soul yearns for the sea.

I experienced a definitive return to swimming and the ocean when I turned 49 a few years ago. Remembering the joy of training, feeling fit and the high of completing the Alcatraz swim, I had long wanted to do another open water swim in one of our beautiful estuaries and I decided to make it a goal for the next summer. I began to swim and train in earnest for the first time on a Masters team. It changed my life. I began to compete and do open water swims regularly. I had mixed feelings about competing because I resist combining competition with something I love so deeply but it has added new dimensions to my experience of the water.

For me swimming is like trying to create poetry in motion; I seek to learn, explore, feel, and enjoy myself. Swimming and the ocean are part of who I am. I decided to journey to the sea every day to immerse myself in this world and medium in new ways and see where it would take me. Here is Swimming at Dawn.