The sea, once it casts its spell, holds one in its net of wonder forever

My Body the Ocean: Swimming My Song 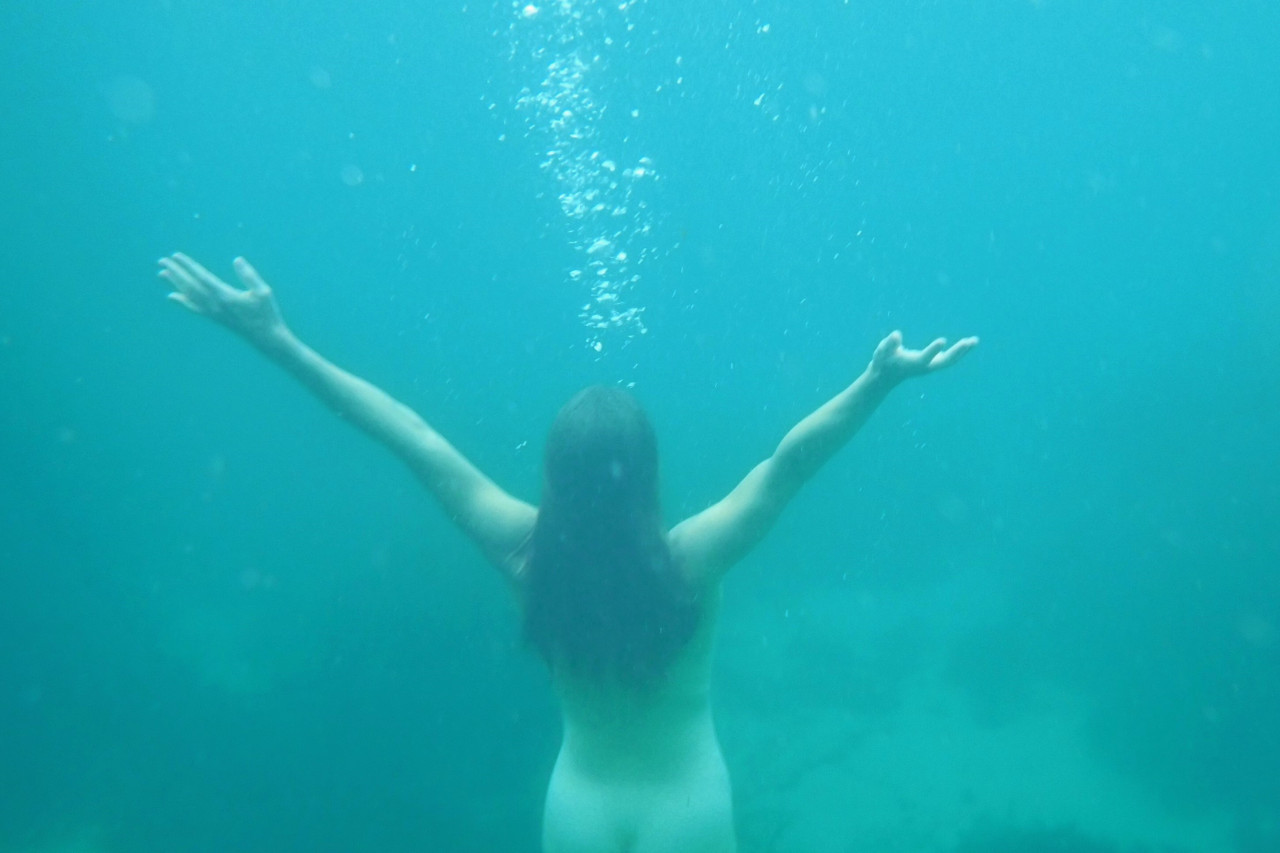 My Body the Ocean - I sing my song to the sea.

Even with the windows closed, I can hear the deep, powerful resonance of the ocean, a 20-minute walk away from my house. I live on a hill that looks down upon the sea. It's too far to hear individual waves crashing but close enough for the collective roar to float up and surround my consciousness as a constant presence. Even though I am often not aware of it, I often tune into its comforting sound, a return to a long-forgotten, yet deeply soothing, amniotic womb state. Each day at dawn I walk down towards the ocean's rumble and roar, often with twinges of trepidation and/or excitement, at the awesome, unknown power awaiting me on the other side of the dune.

The deep resonance never ceases as I step over the dune into the awe. Whether it be the often arresting dawn skies that illuminate my footsteps to the sea, the perpetual wonder I feel as I gaze upon the ocean's grandeur or the powerful elements of wind, rain and cold I face on my swims, enveloping myself in nature's power and beauty inevitably soothes, restores, nourishes, inspires....I pause on the dune. The ocean speaks and says, "Flow. Take it as it comes." It makes me want to sing my song, my song inspired and gifted by the ocean. 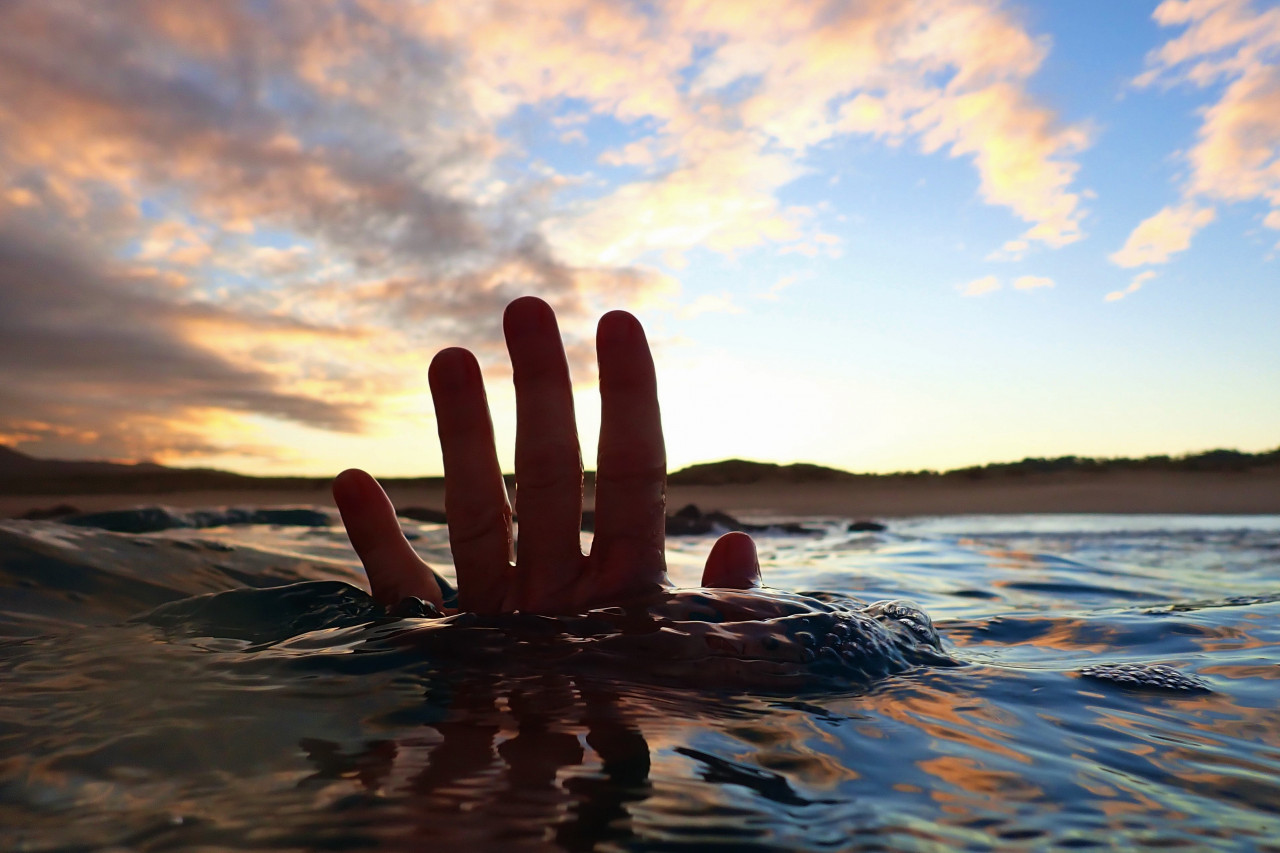 My hand rises from the depths to the surface where the dawn colors reflect, bubbles form and the water moves and flows around my hand. We mingle and merge.

"Harmonics - musical vibrations - are the tides' essence....the repeating orbiting patterns of the sun and moon would be understood as a kind of orchestra, played to an intently listening sea."

by Jonathan White in his book Tides. The Science and Spirit of the Ocean

Over the last year of going to the sea daily at dawn I have been under the sway of this magnetic power of heavenly and terrenal tidal forces as I immerse myself repeatedly in their ever-changing yet constant rhythm of ebb and flow, rise and set moving from season to season. Somehow I've become part of this orchestra as my own inner waves move in constant fluctuating patterns of rise and fall, ebb and flow of mood and emotion. I also listen intently, take in the vibrations, and adapt my immersions to the sea's current song sometimes a gentle lullaby but more often lately a loud piece of heavy metal. The ocean courses through my essence. 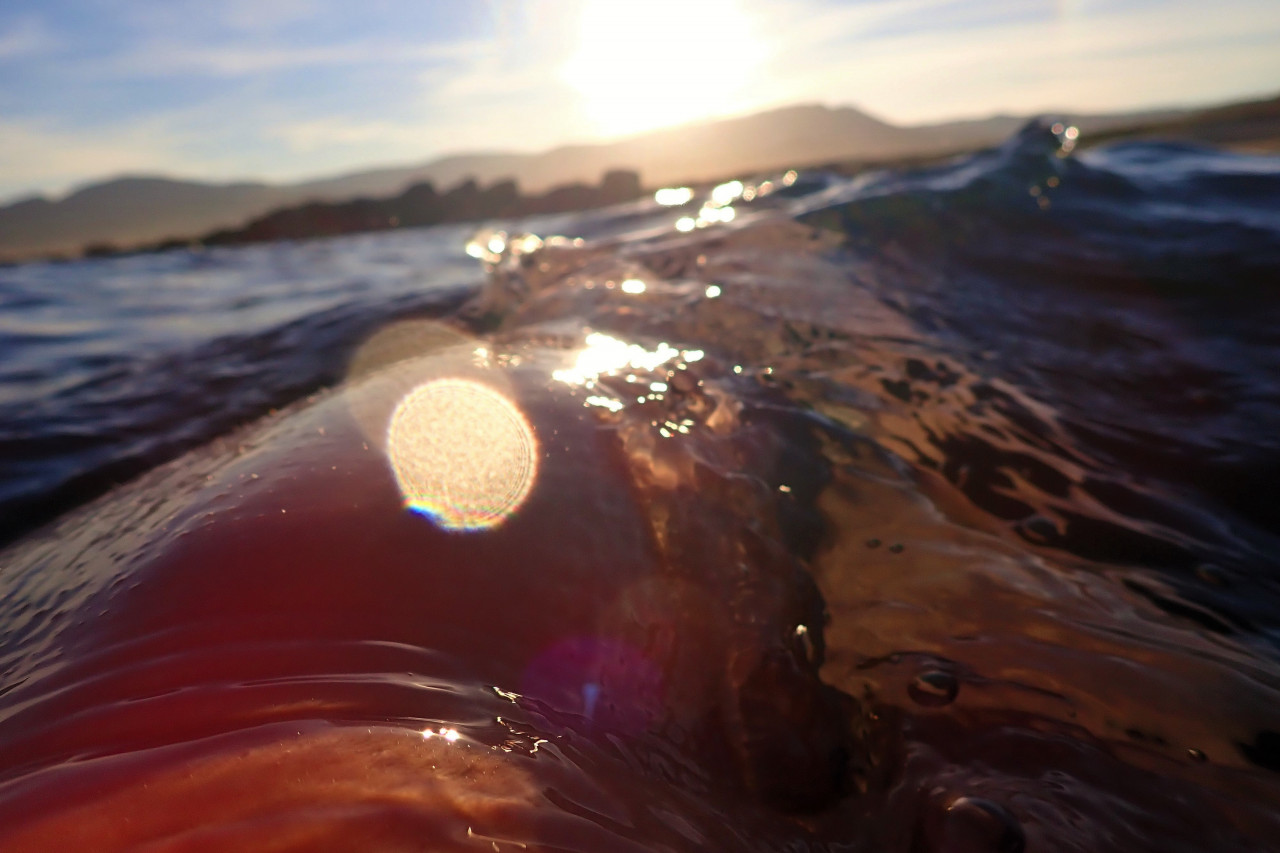 My lower torso glides effortlessly through the sea creating a glistening skin for me, my curves flow with the waves mirroring the mountains in the distance.

As I walked down to the beach one morning in late January, I found myself intoning the words "my body the ocean" and made up a simple tune to match. It wasn't a novel phrase in my head but it suddenly took on new life. The words resonated through my throat and down into my chest and belly. I became aware of the ocean in the background, the low roar that is always there generated by the deep infinite power of the vast seas encircling the globe, the tides pulled along by the moon, sun and planets, creating waves which reach, meet and crash at the shore leaving a constant deeply, soothing resonance.

My body the ocean
My body the sea
The ocean it speaks
It speaks to me.

I matched the resonance in my throat with the resonance of the sea and my visualization intensified. I could feel my body fill with water and dissolve within an imaginary sea - stable at the deep ocean floor, teeming with life further up, filled with light, movement and energy throughout and reaching the surface with knowledge and truth, the roar of its expression. Above the surface my eyes opened, seeing clearly, my head in the clouds, open to the vast horizon, trusting and intuiting.

The waves in my body, especially my hips – a woman's generative space - began to move and I sang – my body the ocean. My mind and body moved the waters within pushed along by the larger forces of sea and sky surrounding me, surrendering to them, accepting them, reveling in them. It speaks to me. It speaks through me.

These same tidal forces create waves that reach, meet and crash within me stimulating its own wonderful renewal and insight which allow me, like the ocean, to spit up what no longer serves it, to expose rocks long hidden by sand but which must be seen and dealt with and to make vast inner shifts just as the shore's sand is constantly being reshaped and reworked. These forces allow me to tap into my creative center, stimulate my imagination and help me deconstruct and rework myself, my body and my mind. 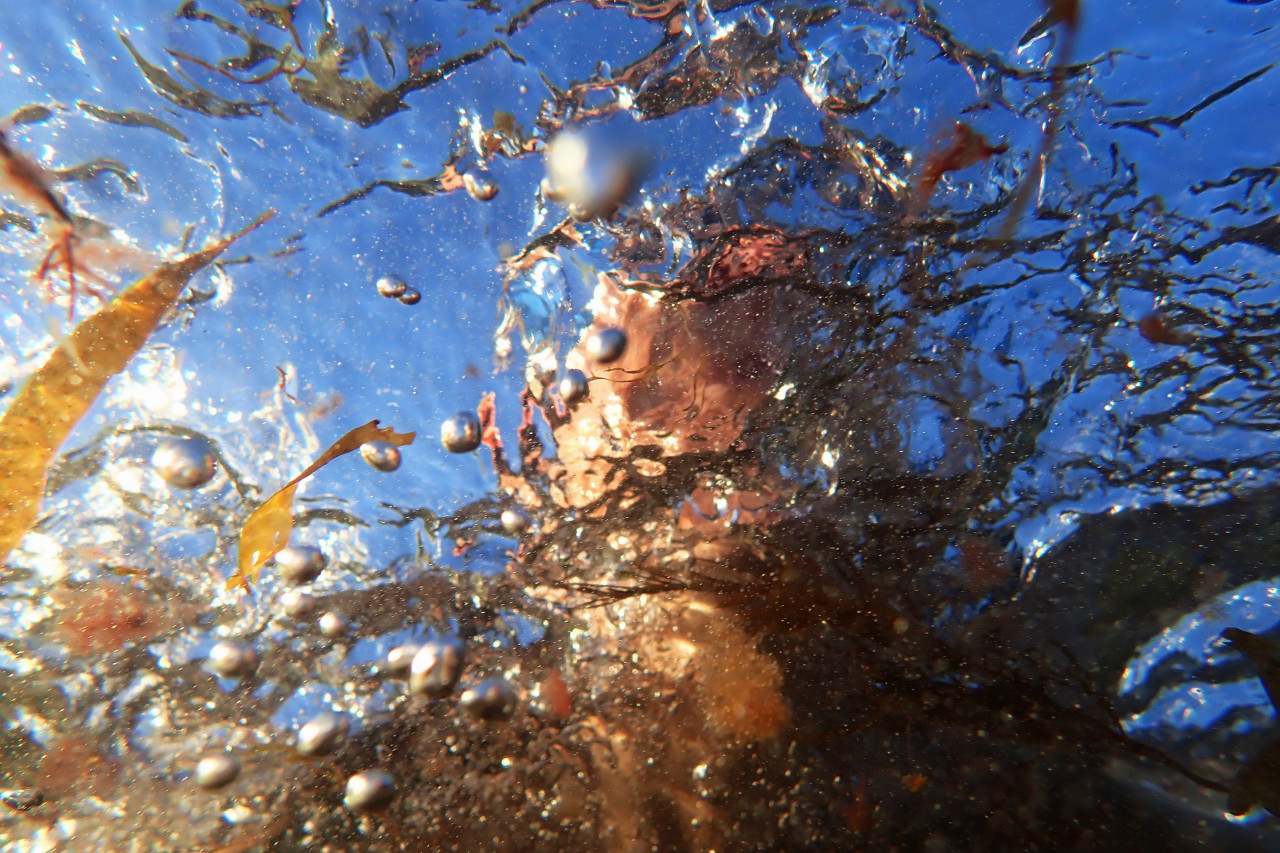 I sang my song and felt the deep connection and fluidity of my body as it merged with the outside world. Expansive learning. Constant changes in tide, weather, sand, and creatures I encounter all influence how I can meet the sea mirroring my own vast range of emotions that accompany me from joy, wonder and playfulness to grief, doubt and a troubled spirit. An often harsh, ruthless teacher, the sea offers infinite, generous wisdom there for the taking. Listen, observe, go still, be patient. Our conversation grows and evolves.

In this video I sing my song again to the sea as I enter at my favorite spot at the Bay on a rainy morning when the tide was low and the sea relatively calm. Further offshore the incessant waves crash.

Immersing myself daily in an exceedingly wide range of conditions, I've realized, helps release and open up parts of myself wanting to be expressed but blocked. Being tossed about in the sea, riding the waves to shore and simply laying still in a tide pool, loosens up those constrictions. Like crustaceans stuck to a shell and imprinted long ago and mostly forgotten, these constrictions still act strongly upon me, like upwellings of kraken-like creatures from the deep ocean of my psyche whispering fear-inspiring words..."if you speak your truth, you will be punished."

Seeds of doubt got firmly planted in my young mind when knowing that expressing my truth might bring unpleasant consequences. To avoid this I remained silent, hiding the truth, doubting myself and my strength, angry I knew something was wrong when told it wasn't and, in fact, being admonished that I was the one who didn't know or understand. Impotent and survival-oriented, facing circumstances beyond my control, I took it inward, began to believe what I knew not to be true. Trust in my intuition and self-belief were greatly undermined. I've carried this with me many years.

Facing the sea helps force me to contend with these deep doubts around my creative expression and other areas of my life that I didn't realize still haunted and limited me mercilessly. In my beloved sea, my voice, that gateway between body and mind, opens, feels no limits, and glides effortlessly through the waves. In the sea, I become my truest self. Little by little the crustaceans gripping my throat, break off and fall to the bottom of the ocean floor, lightening my spirit and opening my inner channels of expression. 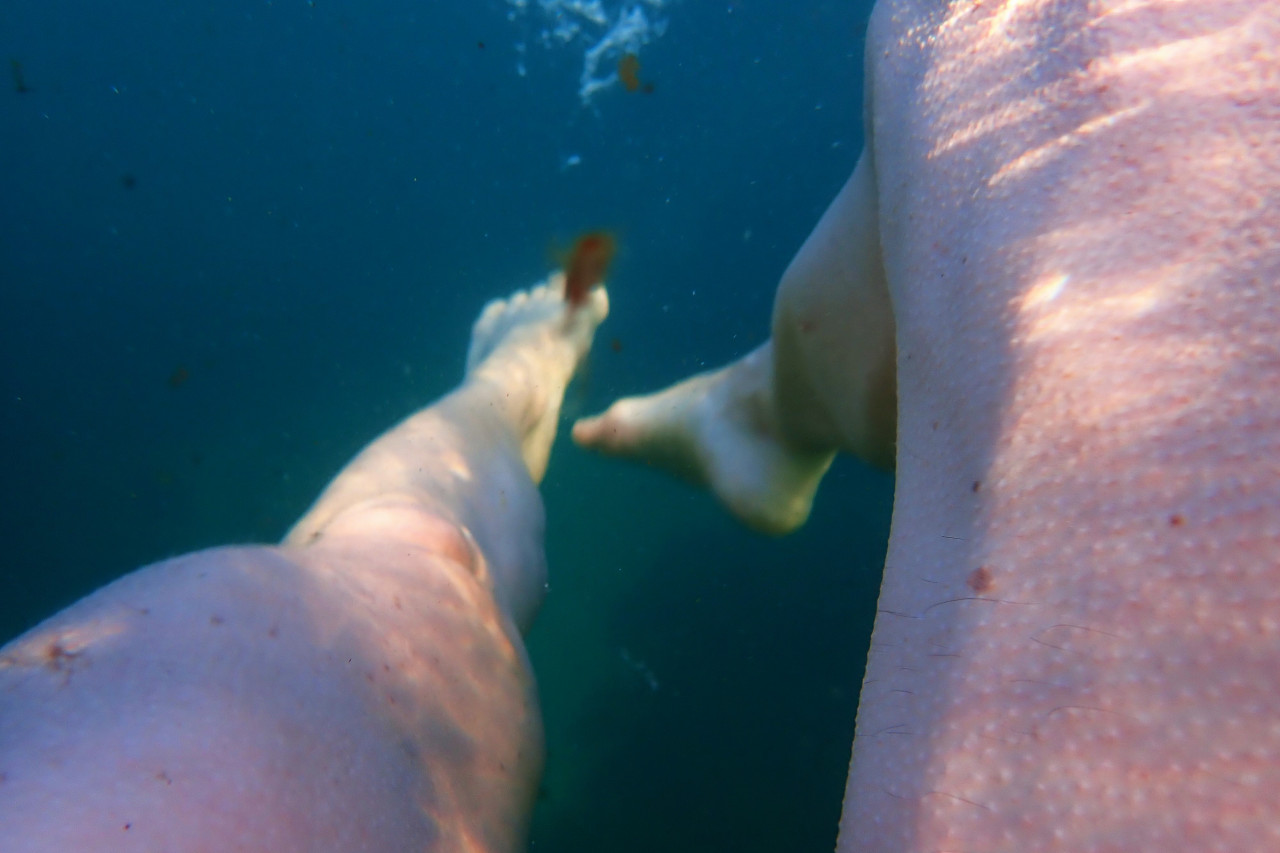 Sometimes people comment that I am brave to go the sea every day. For me it is a much braver act to sing my truth to the world than face the magnificent, wild ocean. Give me the rain, roaring wind and rough waves and I will sing into the wind, laugh at the rain and ride the waves to the shore (if the sea lets me). An important part of my pilgrimage and journey to the sea (to my soul, to myself in the sea, to the sea within me) this year is learning to sing my song in a new way and to learn to ride with and befriend those kraken creatures that have long haunted me. Passion gives courage and strength.

What song is inside of you waiting to be sung?

In my next piece on the theme My Body the Ocean, I invoke the sea's power into me and share it's strength.

The Water is My Prayer: Collective Wild Swimmers' Poem