The sea, once it casts its spell, holds one in its net of wonder forever 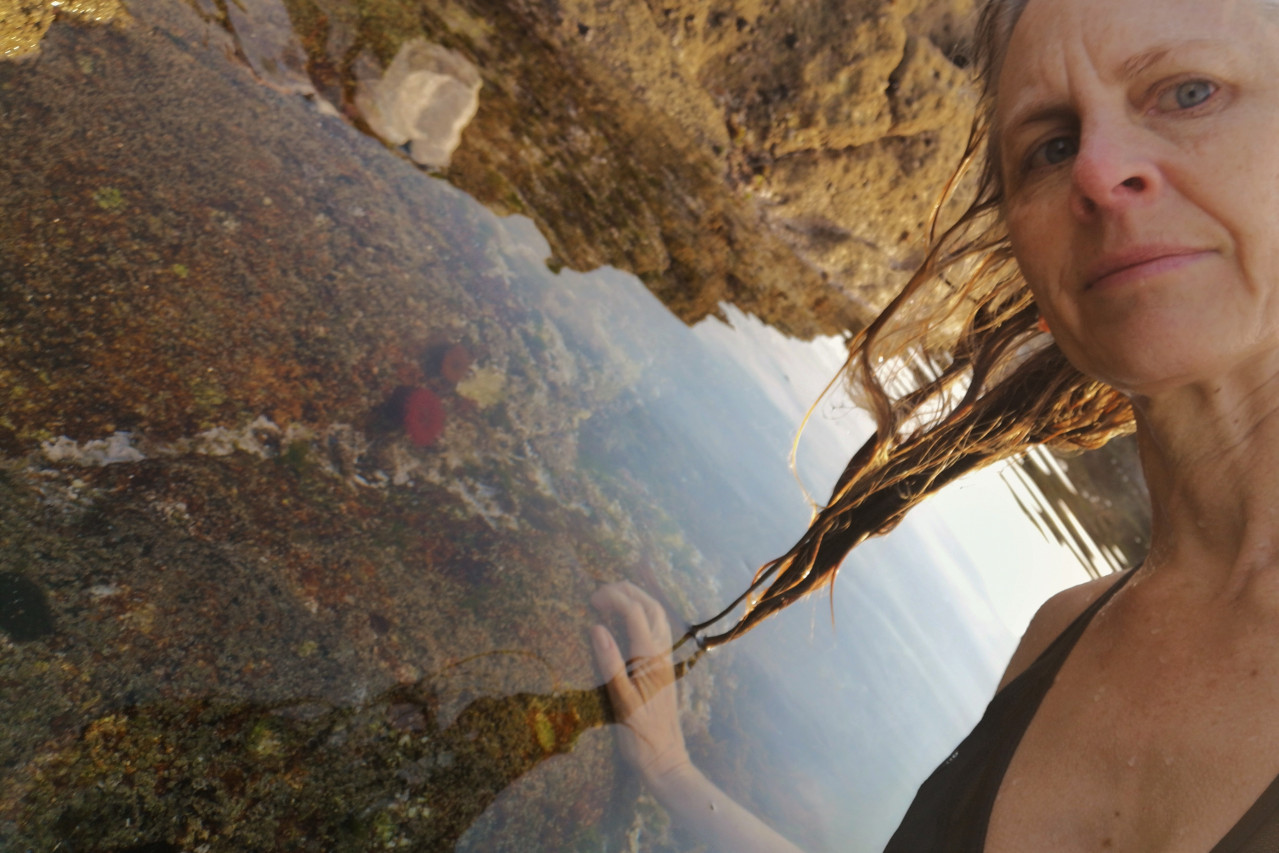 I made this short video after a sunrise immersion in a calm pool in late March 2021. The immersive experience was not just in the water but in the entire tidepool environment where stillness and observation helped open my eyes to the many wonders always around us but which often go unperceived due to our inability to 'see'. I'm aware I've only scratched the surface but it is a start.

Where do our connections to ourselves, others, the world, begin and end? If we feel more connected to the natural world that surrounds us, will we want to value and protect it more? Try immersing yourself in the natural world and observe what you feel and how it impacts you.

Context for this video: One morning between dawn and sunrise I walked down to the beach. It was a breathless day, the tide quite low, the moon waxing. Scouring the coast for an immersion spot, I found myself getting down on my knees observing the life in the tidepools. Small shrimp skipped back and forth. Even smaller spring sand fleas darted across the pool like small submarines moving through the still floating white and green sea grass. Exposed bright green grass lay flat on the rock, drying in the sun. What a difference the water makes. Sea snails ambled in and out of the pools sometimes massed together along crevasses in the hard granite. Each pool I passed, a small universe of life. 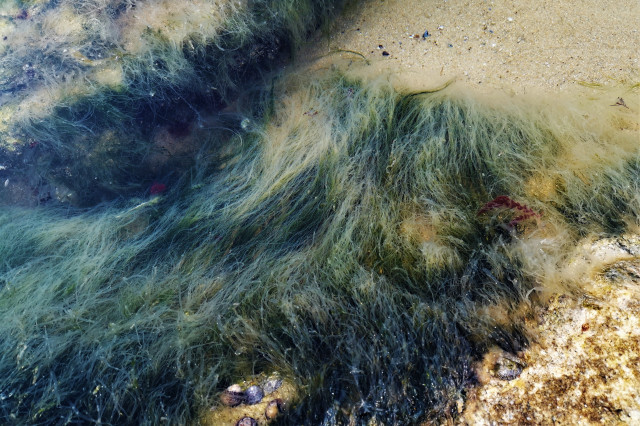 Like mermaids' hair, the sea grasses contain worlds of life 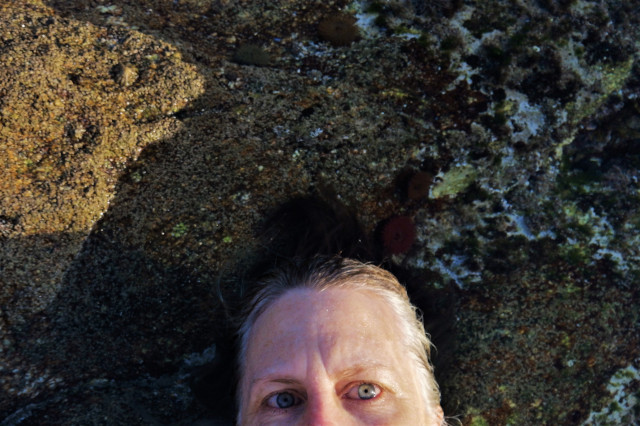 Like one of the tidepool creatures, I'm half in half out, an open Strawberry anemone is above my head to the right 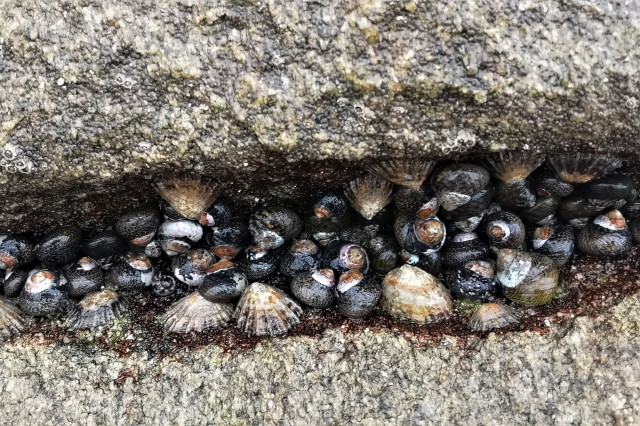 Sea snails and limpets take shelter together in the crevasses 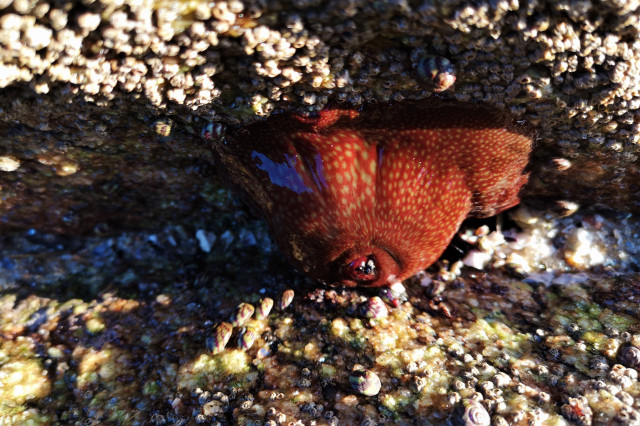 What if we were born in a tidepool and our attraction to the sea is a coming home? 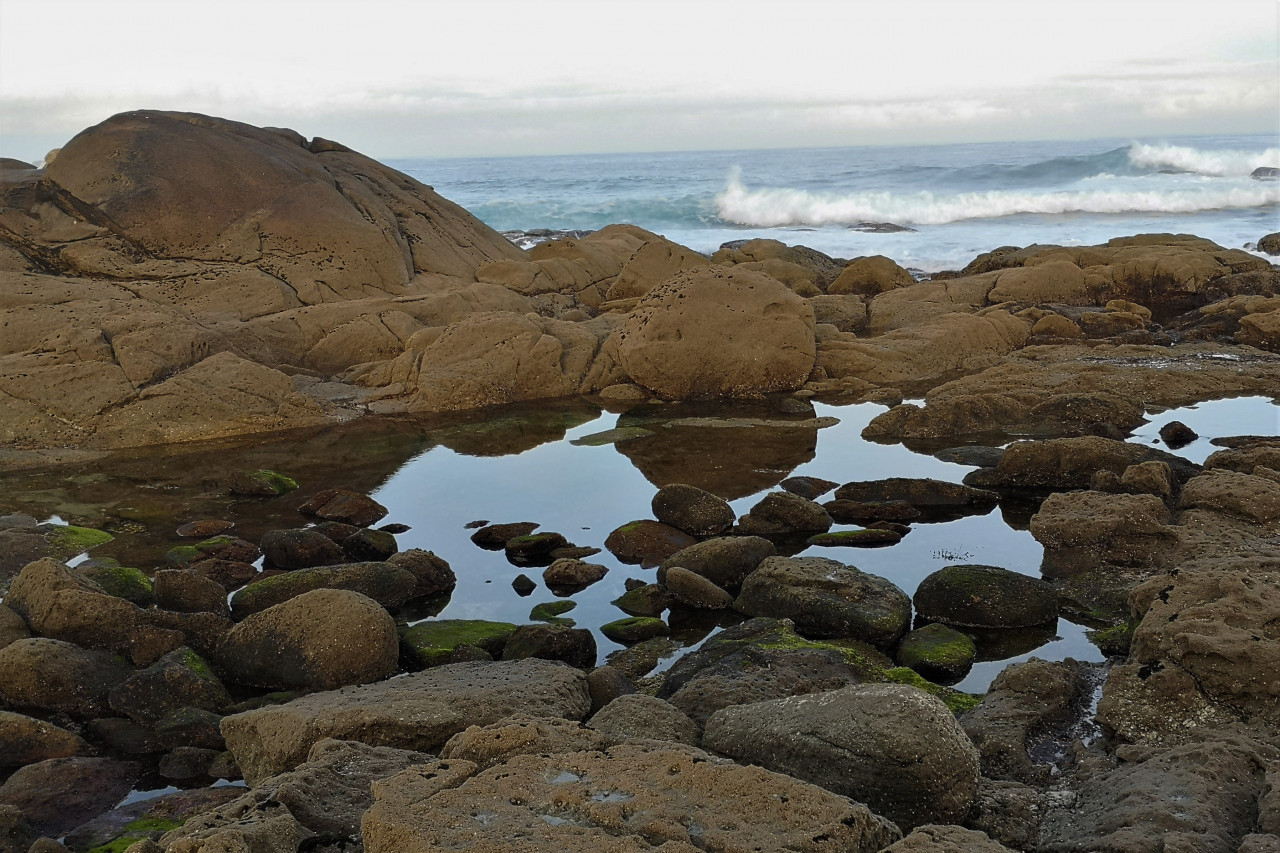 From afar the Womb Pool doesn't look like much. Notice the contrast between its stillness and the open sea beyond 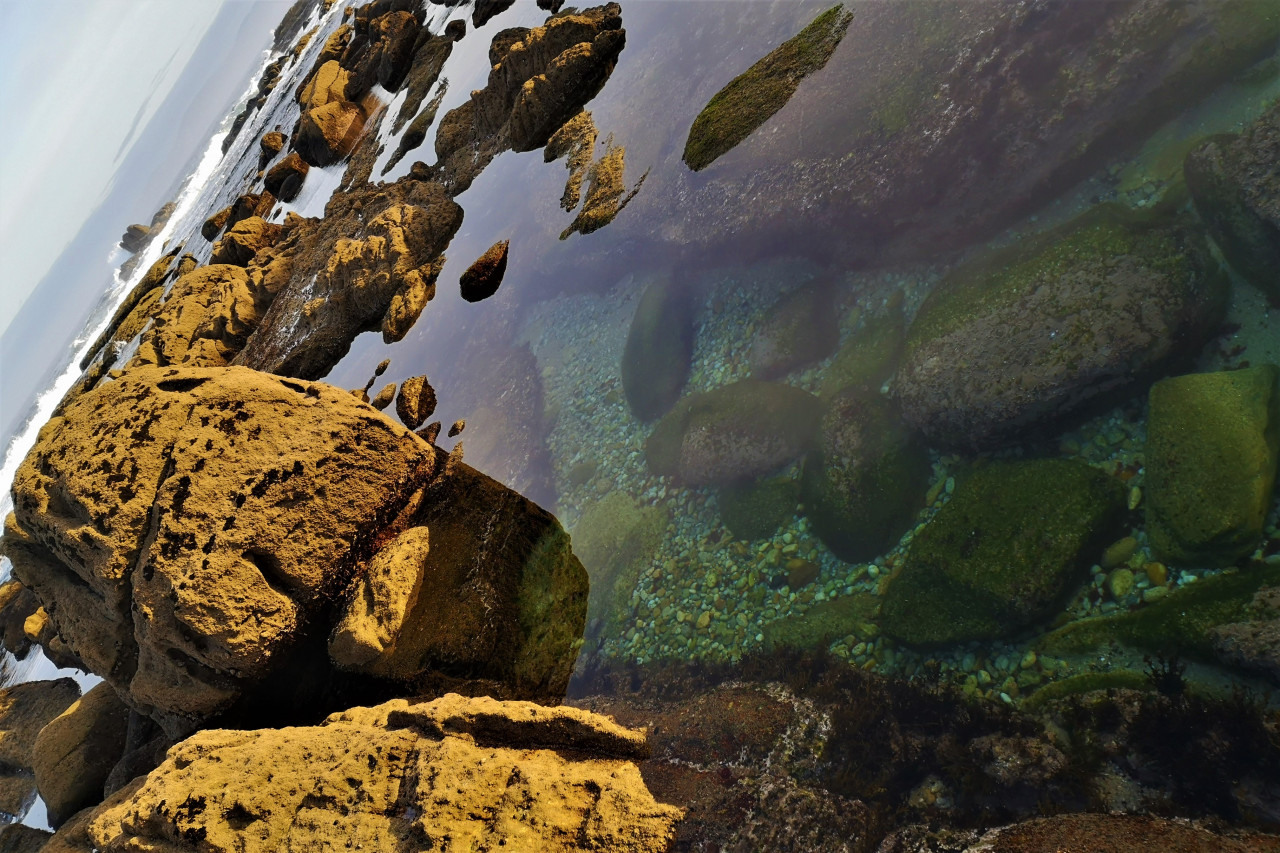 Womb Pool...Utterly still at low tide. Once sandy bottom is now a mess of small stones and boulders. 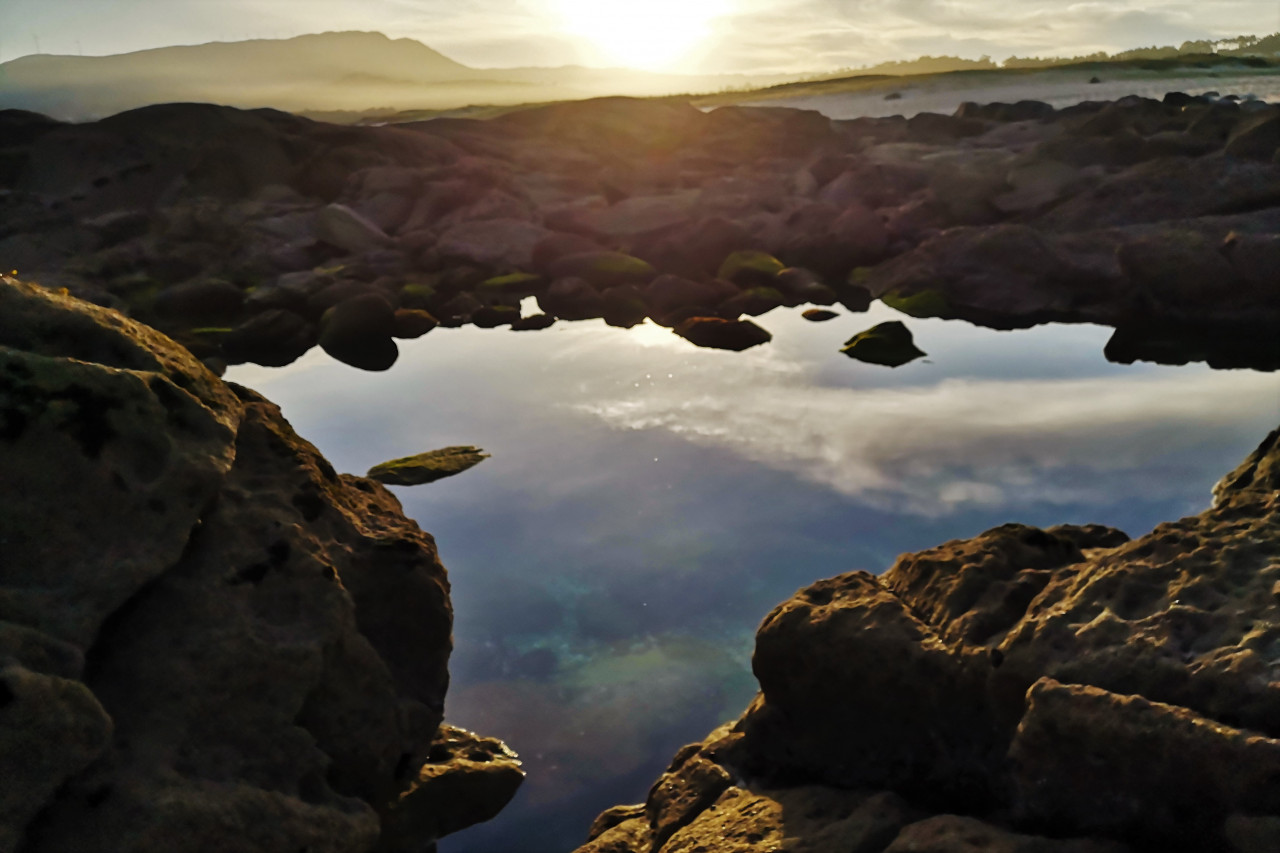 Feeling entranced by the pools I decided to go to one of my favorite places - the one I've dubbed the Womb Pool. Over the last year I've noticed how even this pool has changed its character. Its once sandy bottom now contains many small rounded stones and even a couple of boulders have been thrown in by rough winter seas. Small fish quickly swam for cover over green rocks as my shadow passed or the vibrations of my boots on the rocks reverberated through the water. Green, burgundy and orange anemones grow on the side of the rocks, while nearby, on the low tide-exposed rocks, their brethren are shut tight until the next flooding tide. The tide was so low barely any water was coming into the pool and the water was nearly still. 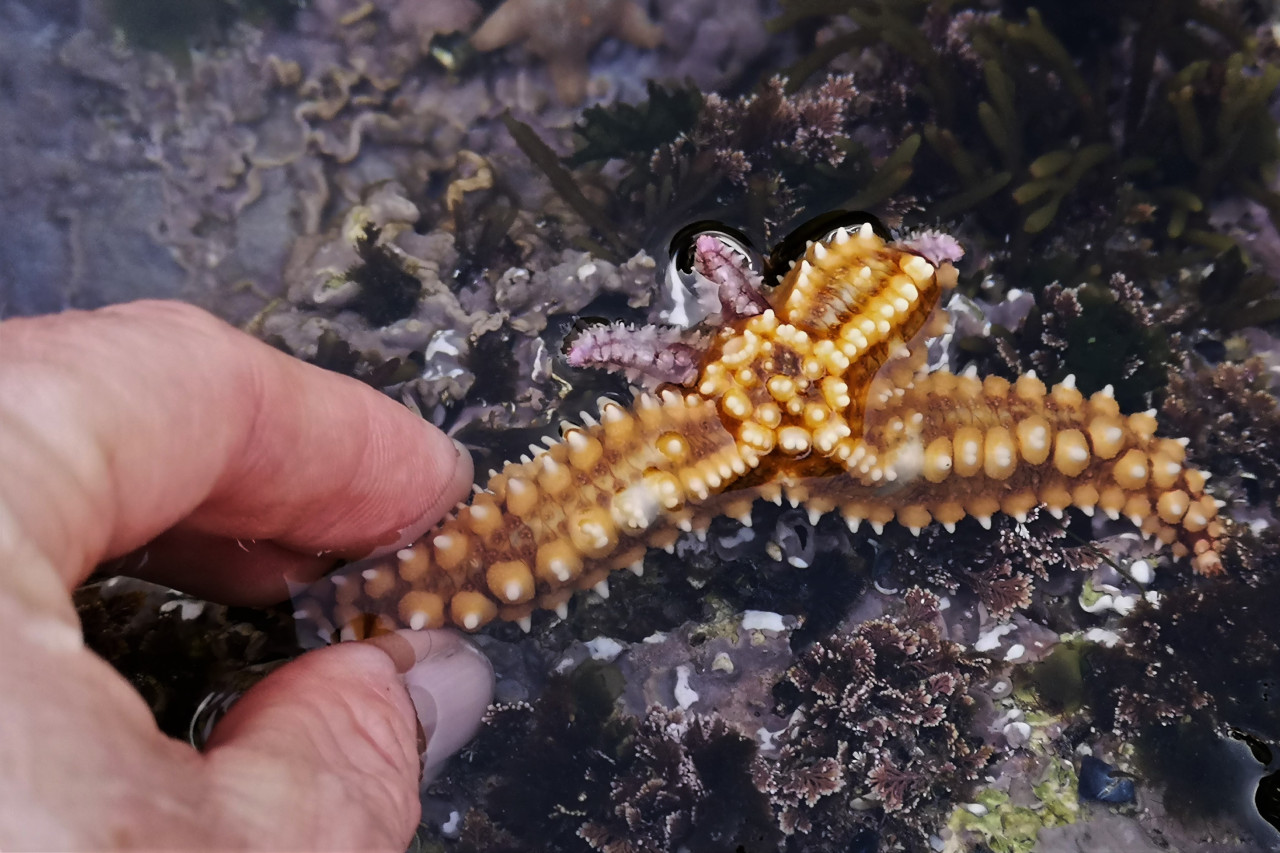 Before undressing and getting into the water, I decided to check and see if a tiny octopus cave was occupied. It's a spot I can only access at low tide and is one the coveted secret dwelling spots that locals know octopi use to live and take shelter in during the tidal shift.  Instead of a new octopus I found an incredible survival story! Inside was a small starfish with only two arms fully intact. Out of the stub of a third arm a small pink finger was growing and two other mini pink arms were regenerating. I felt awed by nature's regenerative capacity that this incredible creature demonstrated! In the video at the top you can see it in action at the end as it glides away crossing over another tiny kinsman. 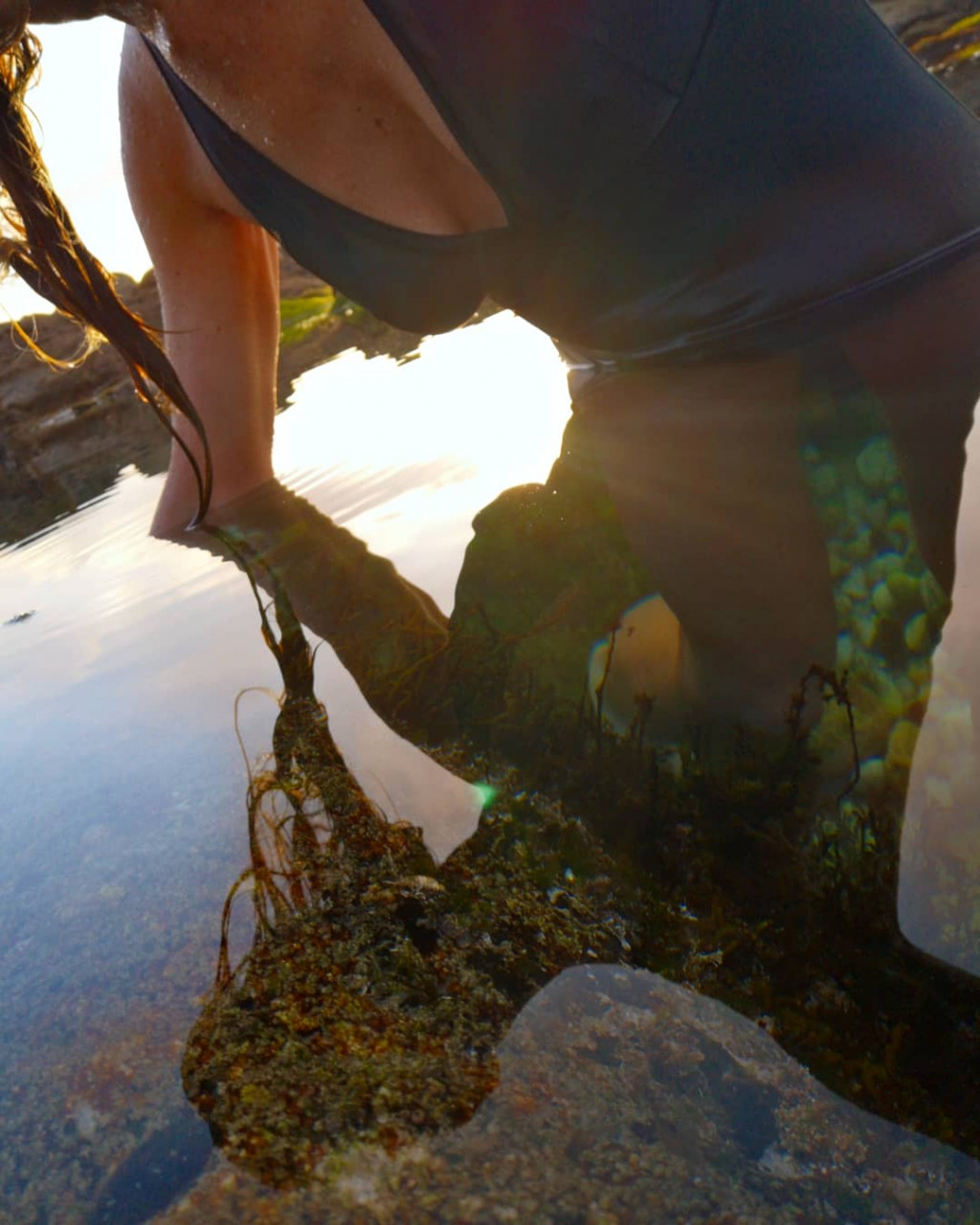 Once in the pool I found myself entranced with the light, the reflections, visibility in the water. My hair touched the surface of the water and then became part of the water. My arm reached in and my hand disappeared into the underwater world. My hair shadow merged with my hair in one long line. My shadow, my watery soul, is revealed full of saline, plants, animals, rocks, true but distorted.

After I stopped playing with the reflections and what is visible above and below the surface, I immersed (as seen in the video) going completely still in the pool. I like being able to achieve a stillness where I ebb and flow with the pool almost imperceptible movements, just another creature within. In the video you can see how my body floats and then gently moves, perhaps my breathing (which looks quite rapid in time lapse mode! but was quite slow and steady) shifted me. Who knows? 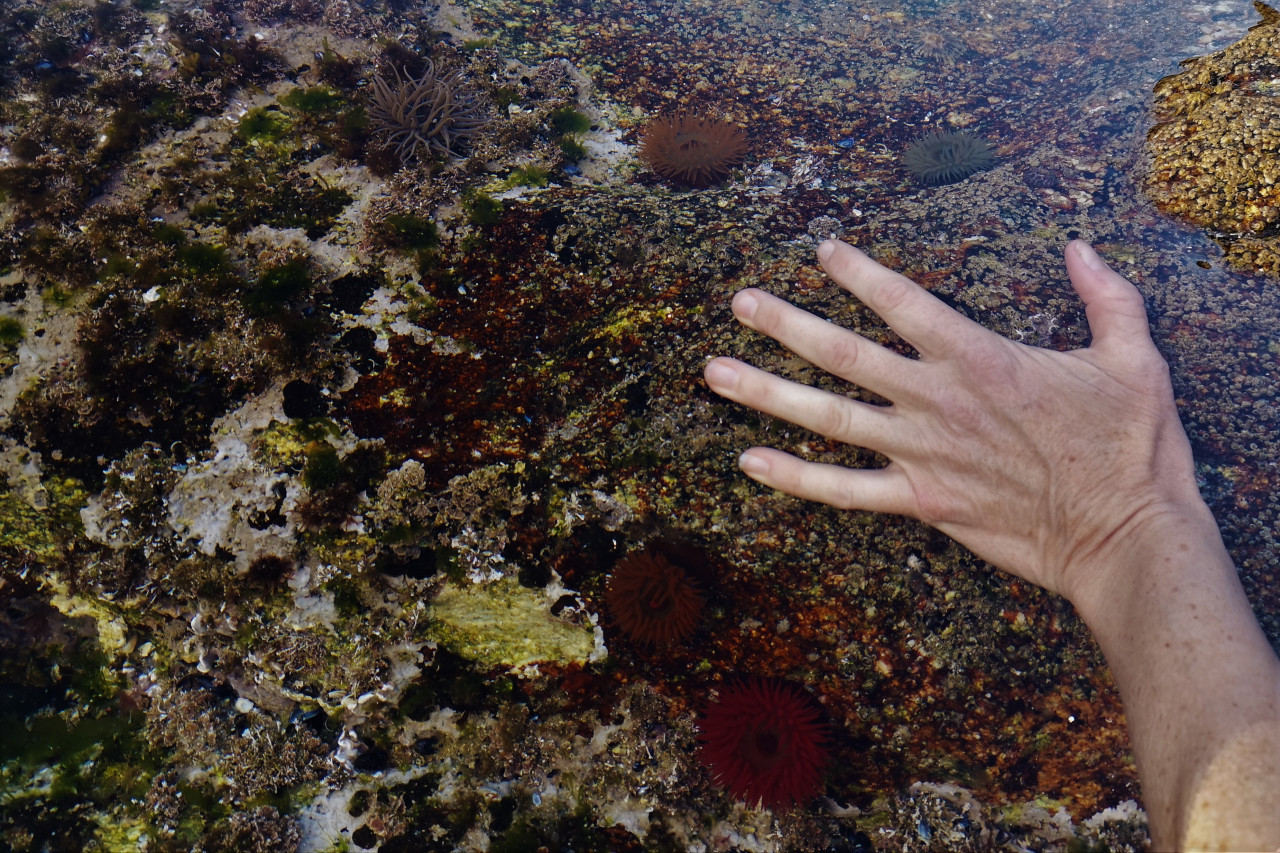 As I climbed out of the pool I spied this marvelous collection of five different anemones, just below the surface, opening their arms towards the water and light. I couldn't resist putting my hand in between them, my body and arm half in and out of the water just like another tidepool creature myself. I felt the tide turn as I finished my immersion. Small pulsations of water began to arrive from the open sea, just meters away. Did the exposed creatures sigh in relief? Did they look forward to the return of the cold water to open themselves once again to the perennial rising and falling flow? Or did they simply deeply accept the constant rhythm of tidal change every six hours that exposes and requires them to contend with? I suspected the latter.

Wonders abound everywhere! The more still I go, the more observant I become and the more that becomes visible to me. Open yourself to the beauty within and without. Perhaps you will also perceive how it is all interconnected and love it even more.

Post-script: I've added in this sunrise video I took in mid-April 2021. Even though the circumstances were quite different, it left me with the same message: We're all interconnected.

Reaching the beach, I realized the sun was just about to rise over the mountain. I decided to stand there watching it. Perched on a rock, I held the camera steady as the waves rolled in around me occasionally going over my boots. The sun popped over the mountain's ridgeline and then the golden rays expanded and reached down the hillside and valley to the sea where the golden pathway formed and linked to me to as I felt the sun illuminate my visage. I felt very connected to the natural world at that moment as the sun, water and new day unfolded before and on me. Find these special experiences of deep joy and abundance. They are always there waiting to be witnessed and held within.