I ...write and ...exclaim ..: I, too, overflow; my desires have invented new desires, my body knows unheard-of-songs.

The Sea Sets Me Free by Heidi Westbrook 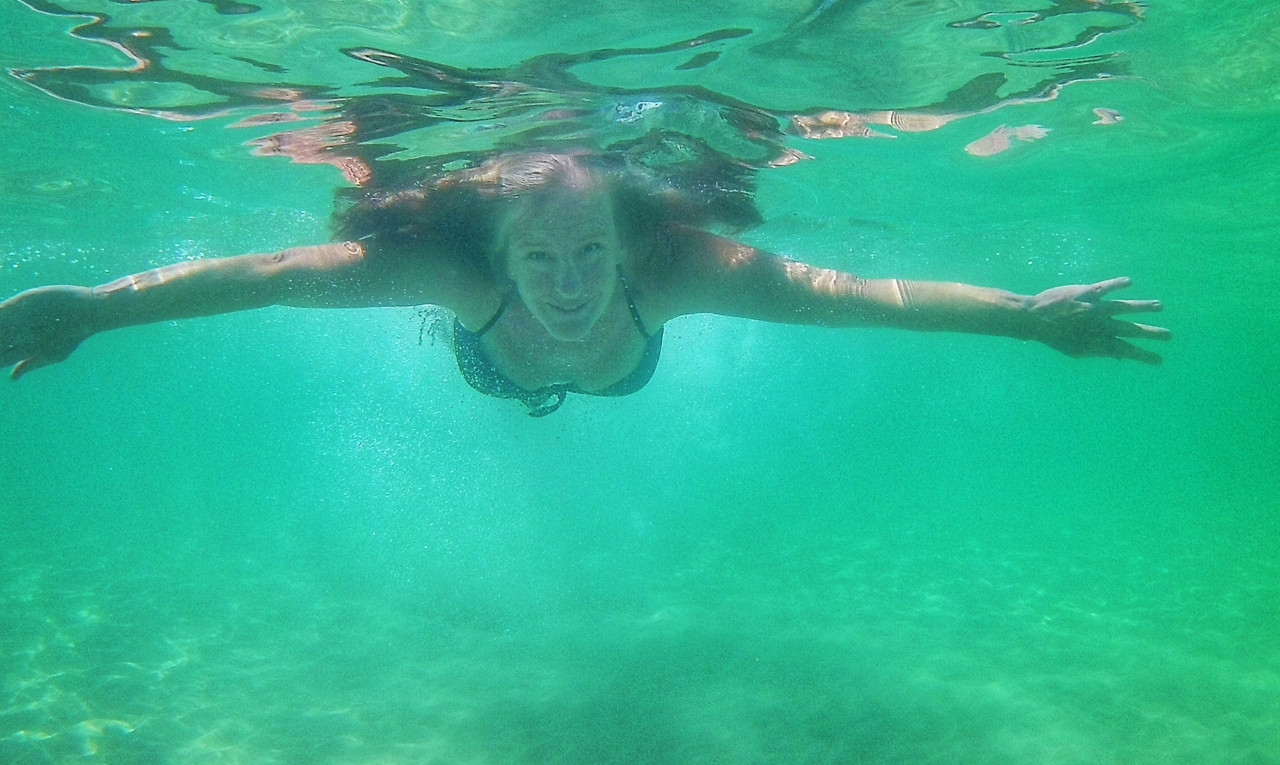 I had found my true self in the sea

Today's powerful Wild Swimmer Story is a woman's discovery of herself, her worth and her decision to live. Many women (too many) allow fears, habits and hang-ups to keep them from embracing what their souls yearn for and need, ignoring what instinct and inner wisdom shouts at them to do. But some women do liberate themselves, shed layers of misplaced shame, self-consciousness and doubt to step into life, or in this case into the water! Heidi (aka the Maid in Newquay) is one of these brave, beautiful souls who set herself free and also finds the joy and support of female companionship bonded by mutual love of the sea. Thank you, Maid in Newquay (on Instagram as @maidinnewquay)!  - Dawn Swimmer

The Sea Sets Me Free
by Heidi Westbrook, Maid in Newquay

For the last twenty years I've lived on a cliff-top above the sea. During fifteen of those years I looked at the sea with a strong, wrenching yearning but couldn't bring myself to simply plunge in. The idea of enjoying it too much scared me; that a new way of life, away from the fags, drink and party lifestyle I was living, terrified me. I was also self conscious of my body. Although skinny, I felt shame. I wanted to swim but where no one would see me. My friend and I would never go on the busy beaches of Newquay but instead we occasionally hid ourselves away on the banks of a tidal river close by, where no one would see us and no one could judge.

I watched from my window for hours upon hours. I could see the ebb and the flow of the tides, the ever changing movement of the ocean, the colours of the sea and sky. I could hear it roaring and crashing in the storms, making the whole building's foundations shake. On calm, cloudless autumn nights, when the moon rose across the bay, the soft white light shone across the water straight into my lounge its radiance illuminating and stirring my soul. In summer the sun rises early in the same position, casting its golden light across the bay into the heart of my dwelling. Every day I walked the beaches and coast paths breathing in deeply the salty air. All the while I felt the pull but resisted. 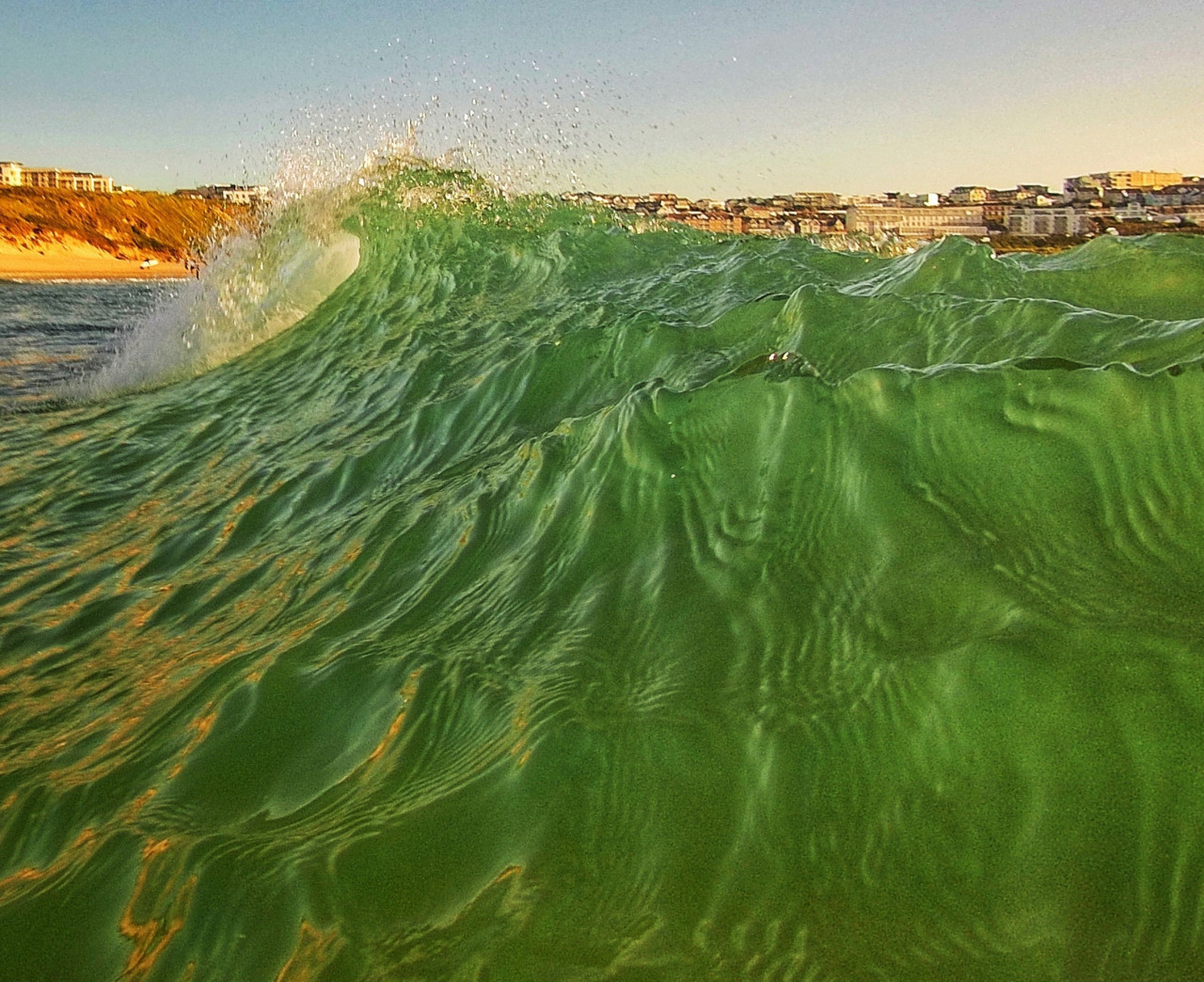 ...the colours of the sea and sky. 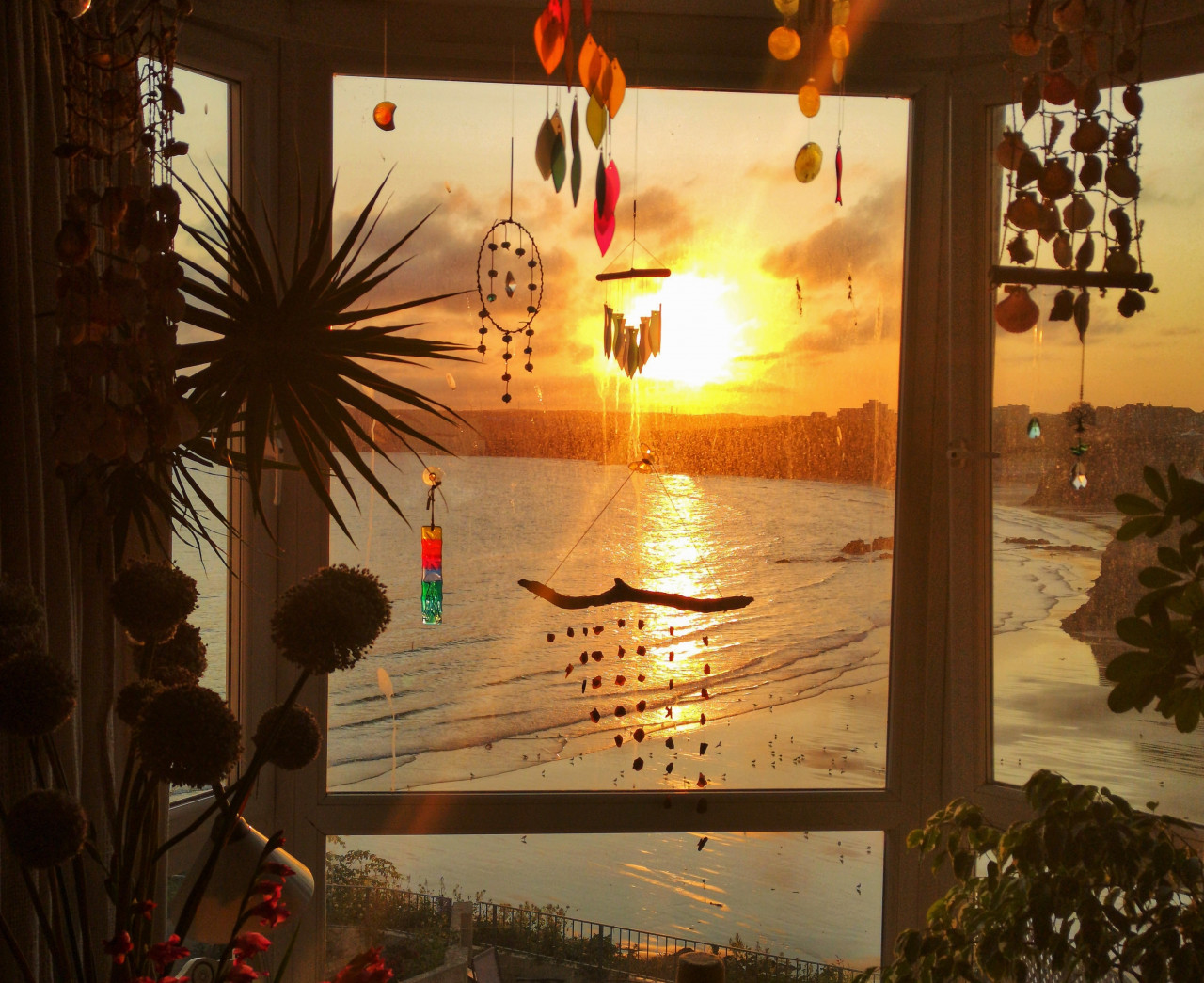 ...casting its golden light into the heart of my dwelling.

Five years ago I stopped smoking and started living. I was 42. Funny how this common addiction can turn you into the shell of the person you are truly meant to be. I put on four stone in a few months and ended up with bad knees and hips from the extra weight. That summer I bought myself a bikini, grabbed my young daughter's hand, and followed her into the sea. I strode in with purpose, head held high, shoulders back, determined not to let the shock of cool water beat me. That day I came home, home to myself. The water held me in its comforting embrace. I felt like I had gone back to the womb and I was being reborn. I never looked back. I had found my true self in the sea. 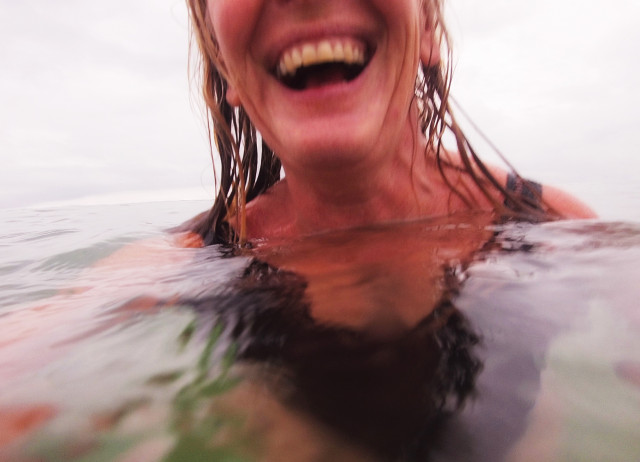 I stopped smoking and started living. 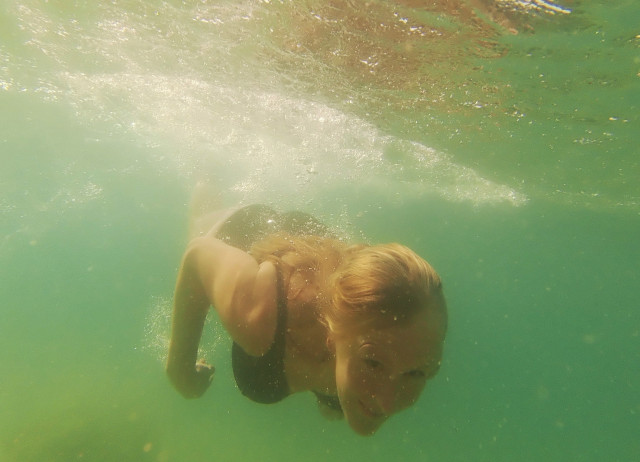 I had gone back to the womb and was being reborn. 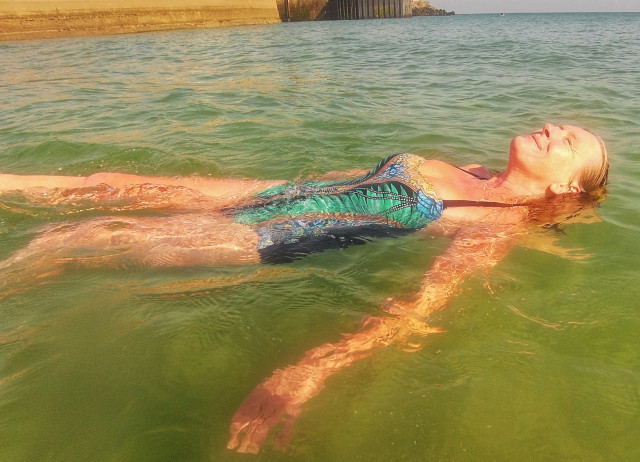 The water held me in its comforting embrace. 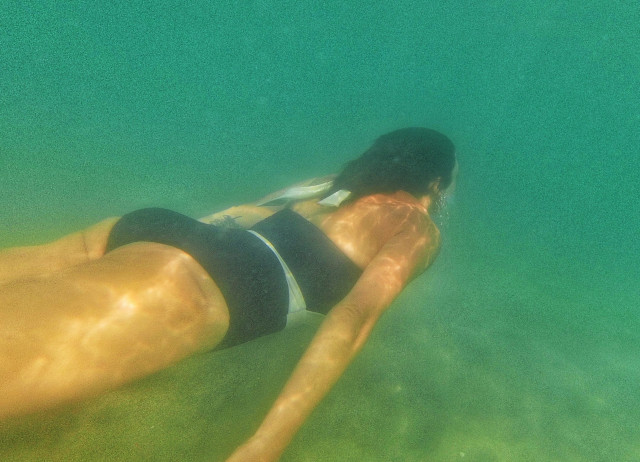 I never looked back.

The beach is a great leveler. Because I had never dared to go onto the beach myself, I didn't understand how freeing it is to be near naked with people of all shapes and sizes. The truth is nobody looks at anyone else. I realized that not one person gave a flying fuck about me as I walked into the sea. There is no judgement. Once I stopped judging myself, I gave myself permission to enjoy it. My daughter and I splashed in the waves. We did handstands and somersaults. We played for hours with an enthusiasm that only a child of the ocean can understand. I started dipping every day throughout that summer and with every swim I felt more alive than I ever had before. 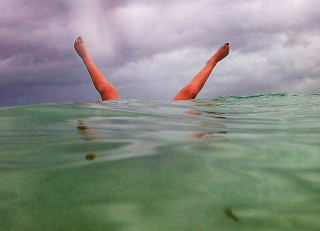 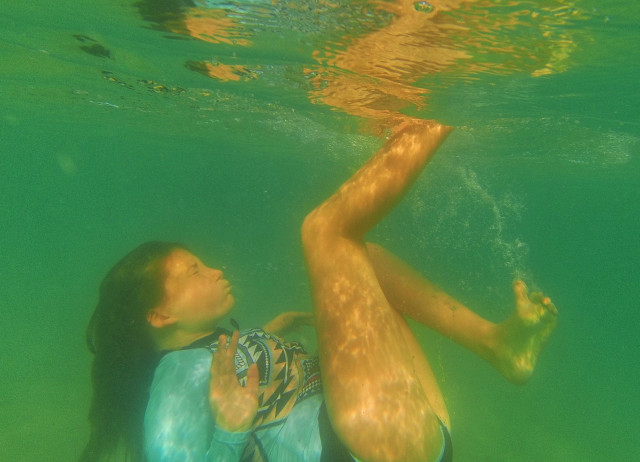 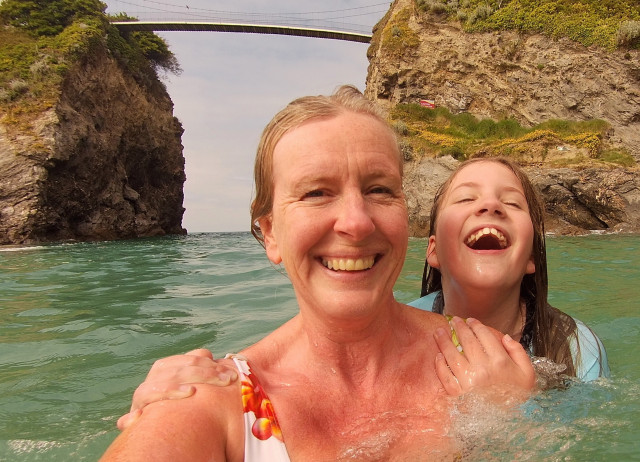 I grabbed my daughter's hand and followed her into the sea. 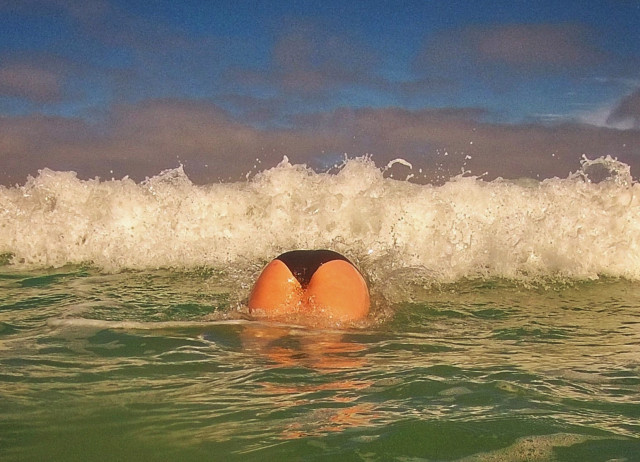 ...enthusiasm that only a child of the ocean can understand.

I got myself an underwater camera and started combining my love of photography with my passion for the ocean. The sheer delight of coming home and downloading pictures not knowing what I had snapped or how it would turn out simply extended my pleasure of being in the sea. Nothing was forced or contrived…it simply just was. And that for me is magical.

For four years the view from my window became our playground. The place where my daughter and I hung out, played, laughed and grew as people. From April to October we would swim, sometimes joined by friends on the hot days of summer. 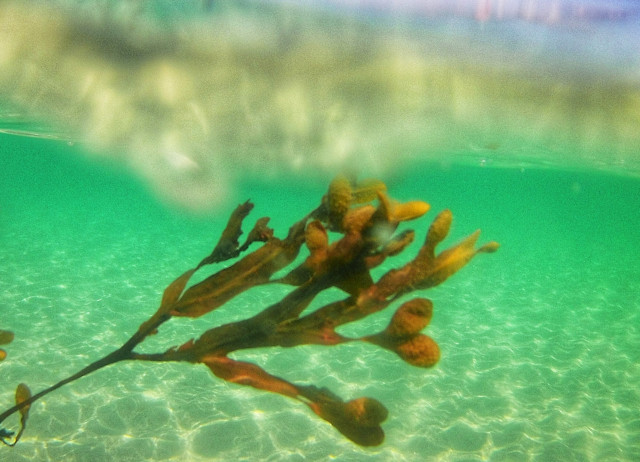 ...started combining my love of photography.... 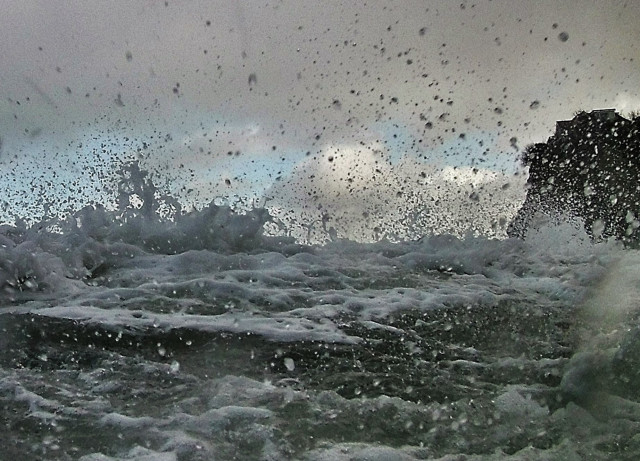 ....with my passion for the ocean.

Over the years I have noticed the odd few people swimming or dipping year-round and I decide that I too wanted to do that. I started to go on my own when conditions allowed and it was too cold for my daughter. The benefits of cold water swimming felt addictive and I didn't want to stop simply because the temperature was dropping. But, reality is, I live on the north coast of Cornwall and the stormy season is no time to be dipping solo on beaches with no lifeguards. 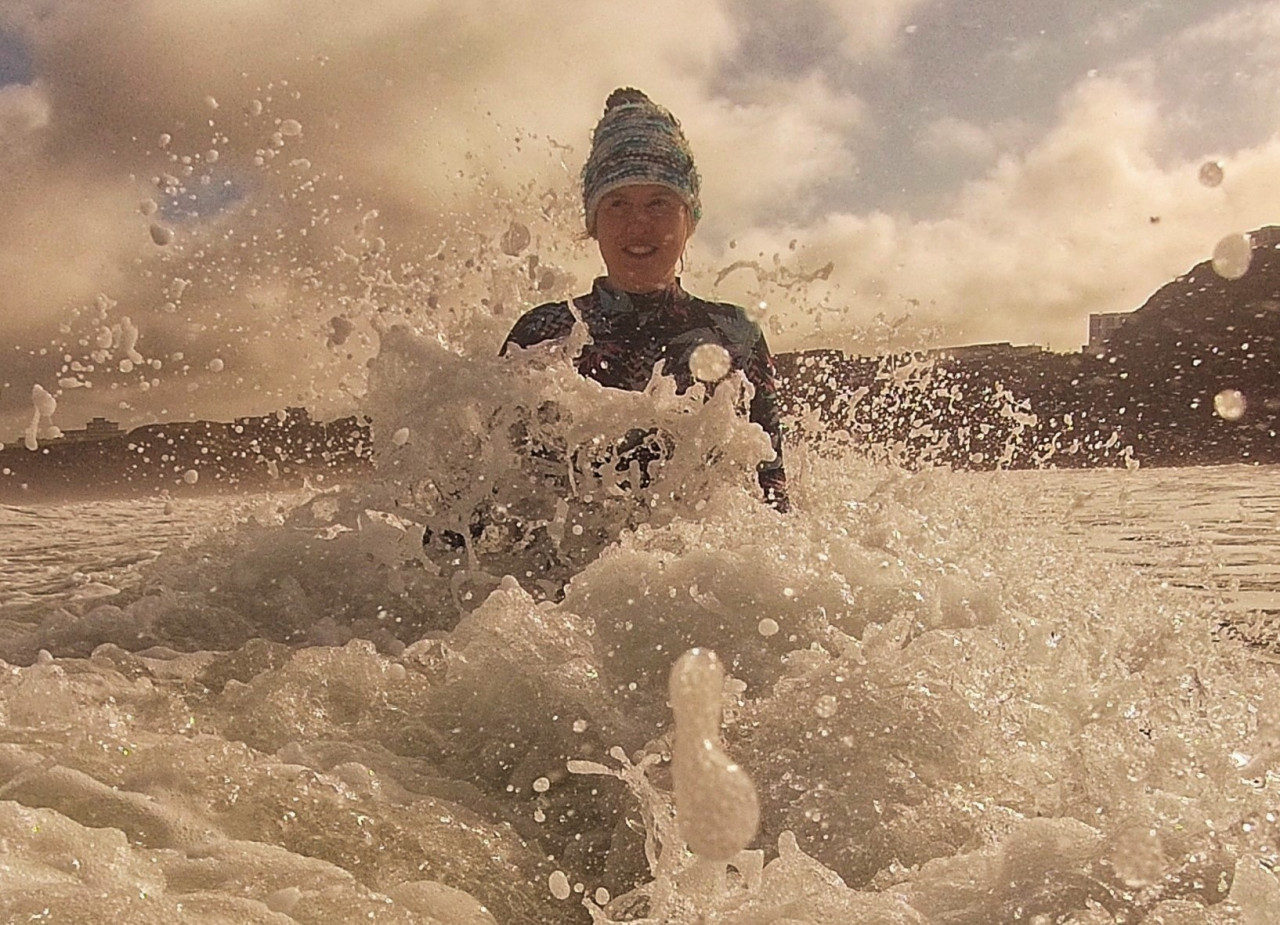 ...the stormy season is no time to be dipping solo....

On the 26th January 2020 I joined twenty or so other women for the Newquay Bluetits first swim. The Bluetits are a motley group of like-minded women who swim together. Originating in Wales there are now flocks of Bluetit swimming groups country wide. It is informal and friendly. The tide was low and the surf was quite big but, much to the astonishment of the hundreds of surfers in the bay, we stripped off to our cossies [NB: bathing suit or bikini] and rather like women marching to war we stomped down the beach with fear and nervousness in our hearts but smiles on our faces. The camaraderie of that day will stay with me forever. The screams, the swear words, the laughter and the giggles were something else. Every woman there had to dig deep to find courage to walk into that brutal sea. Each one did. That day changed my life forever. Not only was the sea replenishing me, but I had found my soul sisters. 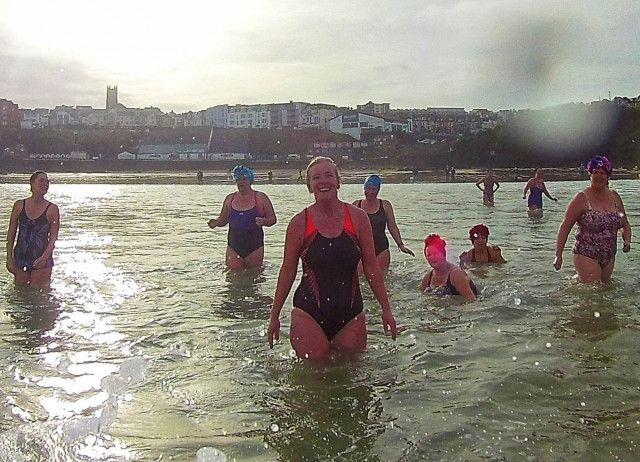 I had found my soul sisters. 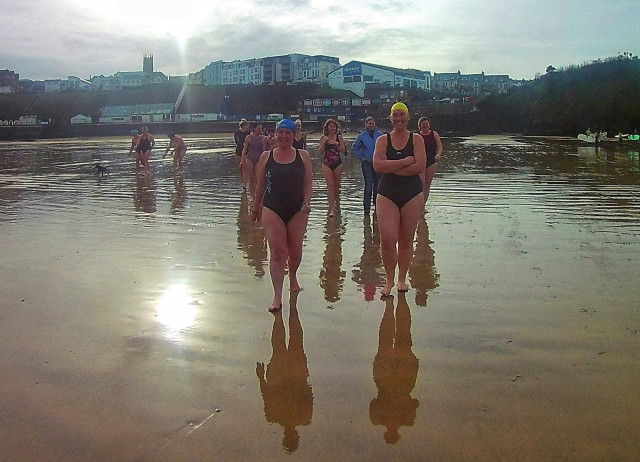 ...we reclaimed our bodies and our minds together. 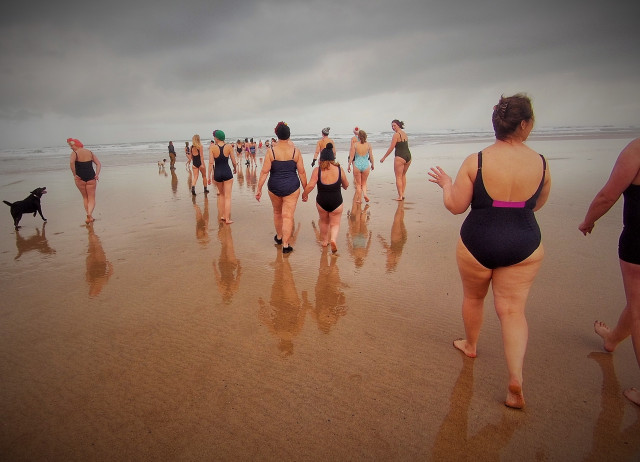 Newquay Bluetits head to the sea 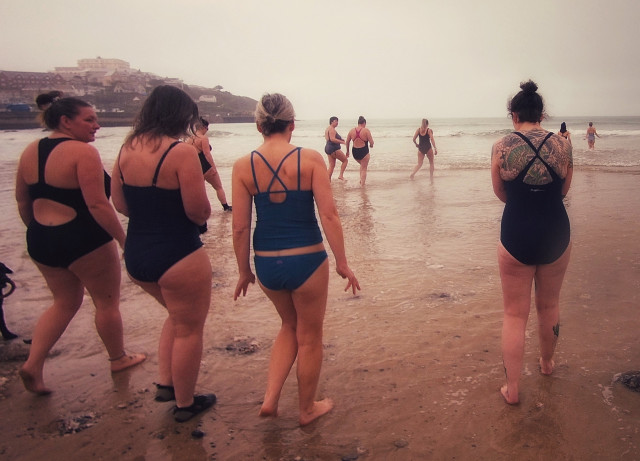 The screams, the swearwords, the laughter and the giggles....

A few more swims and the February storms well and truly hit, making dipping impossible. In March we returned with a vengeance where, in the space of a week, I swam in the dark in the harbour, naked in a mermaid pool, and when hail stung our skin on bitterly cold days. On some days we double dipped.

In late March 2020 lockdown for the Covid-19 pandemic changed everything. Our final Bluetit swim was 22 March. We were told not to swim and I stopped. It was breaking my heart to be so close yet so far. There were days when I was broken, when the tears wouldn't stop. Frightened and unsure of everything, I defied the rules and took the two minute walk into the sea, where my salty tears were washed away by the ocean and once more I was home. I am strong but the sea saved me from my own fears in that strange time. 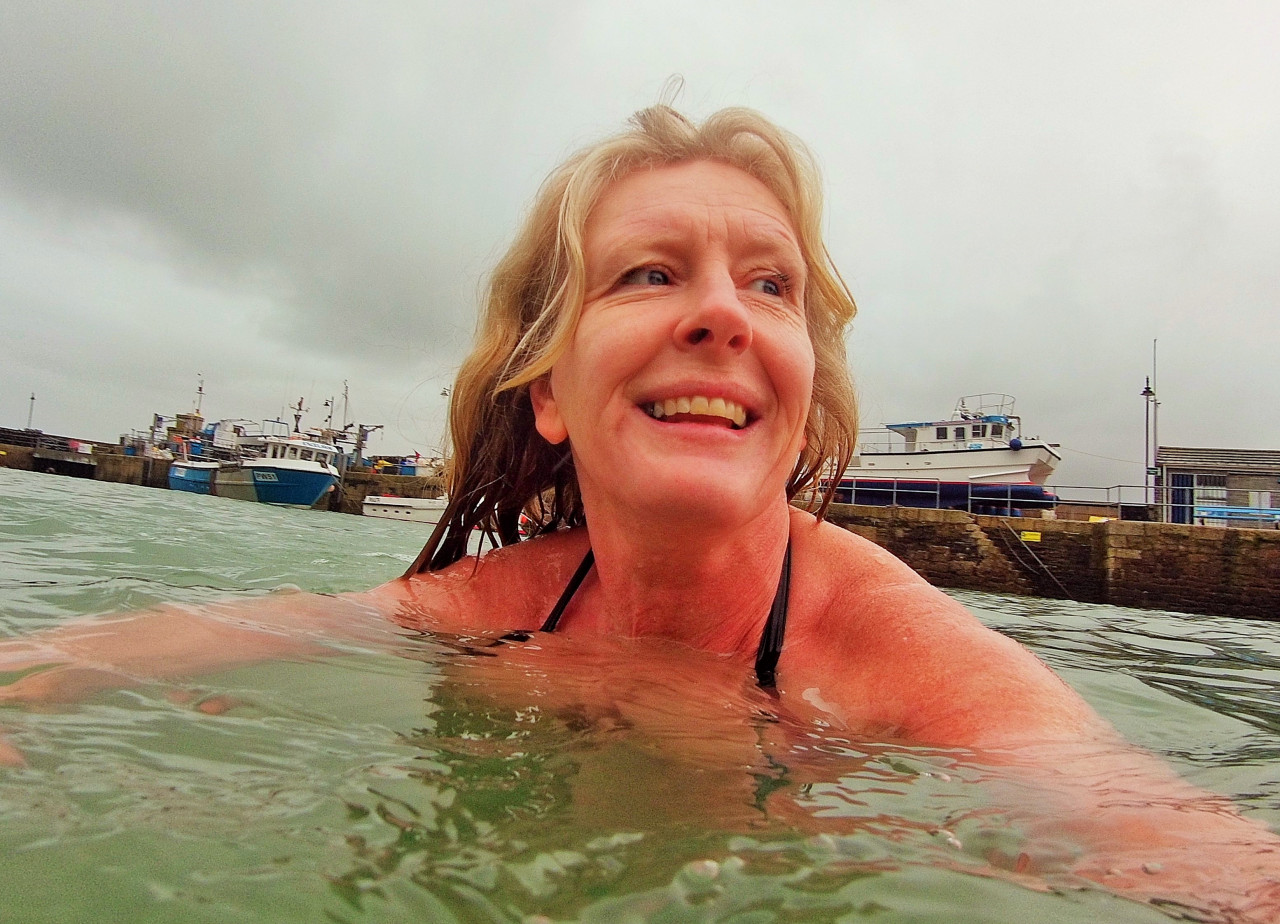 ...my salty tears were washed away by the ocean...

When things started to return to normal in mid-June 2020 we swam as a socially distanced flock again and it was good to be back. More women joined: we reclaimed our bodies and our minds together. Individually the sea changed us, as a group we found ourselves again. Every swim is invigorating, every swim is different. The sea makes everything right again whether it gently floats you or slaps you around like a wet fish. Whether I swim alone, or with a group, whether with close friends or the ever growing flock of Bluetits, it's always beautiful and empowering. I feel the energy of the earth surrounding me, cleansing me, and making me whole again. The sea truly does set me free. 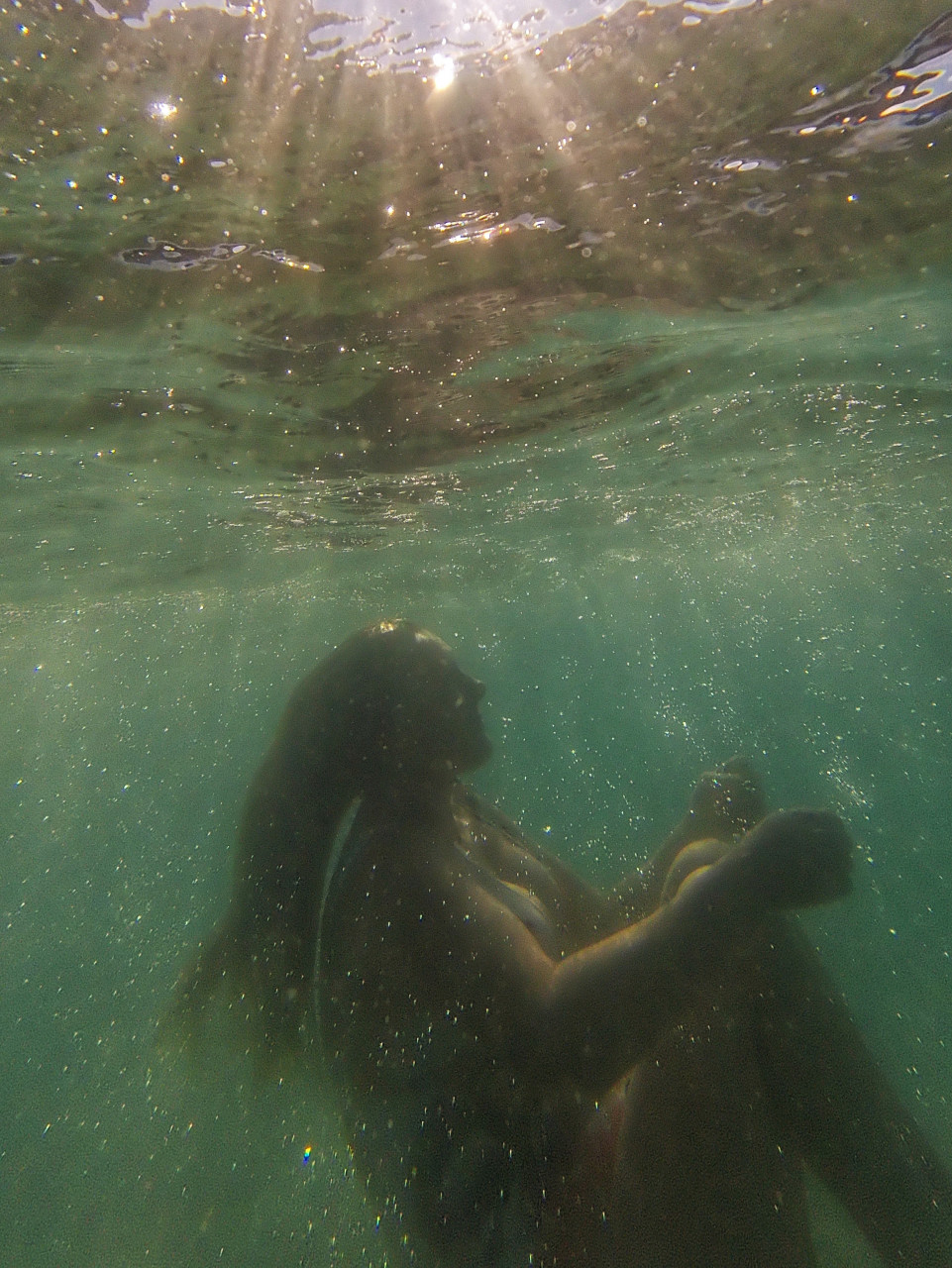 Photo credits: All photos taken by Heidi Westbrook except for the last one of Heidi in the water taken by her daughter Bella.
Tags:
sea swimming swimming bluetits wild swimming empowerment
Embracing Fluidity by Ángela Lavilla Cañedo
Waking to the Lure of the Sea by Sara Solnick

Heidi is a middle aged, single mum with a passion for life. Originally from Yorkshire, she settled in a small town on Cornwall's rugged north coast many years ago. Like many others in Cornwall, she's self employed and uses skills learnt throughout her life to earn a living in a varied, creative way. You can find her on Instagram @maidinnewquay