For the best part of a year, the water would become my natural habitat. 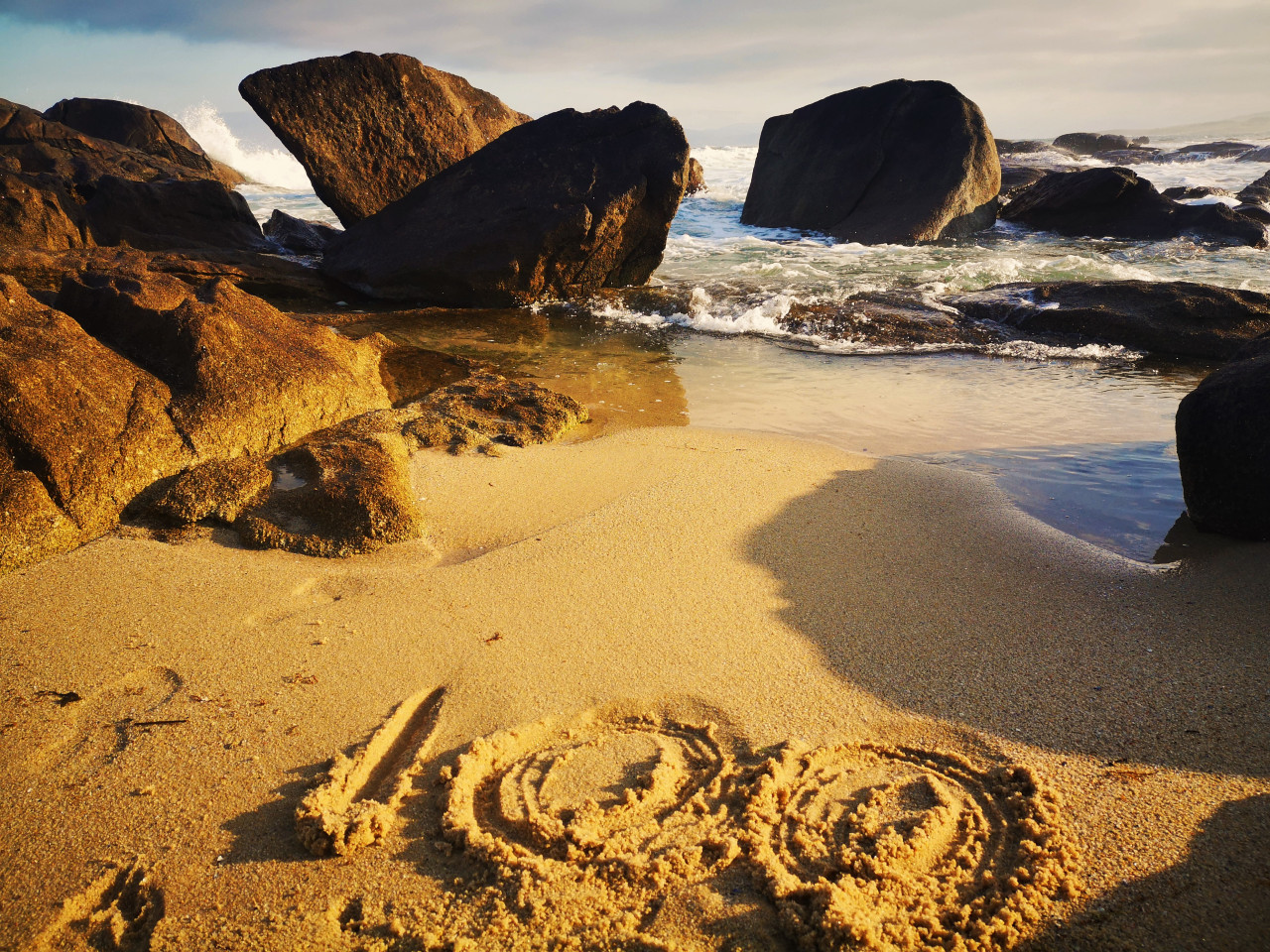 When I started this blog I had no idea I would swim every day at dawn for a year. As it evolved, 100 days became a goal. But then, 100 came and went and I was at 200 days. Now, as I write, I'm past 365 and still going. Water immersion has simply become a part of what I do only a daily basis. This particular blog piece was written with the idea that 100 would mark a limit and it did and it does but the journey evolved, as they do.

Day 100. Starting at the end, which is not really an end, as each day is unique and a new beginning. Numbers are useful but they are also meaningless. But I decided to put a number on this blog. 100 days. 100 unique days of meeting the sea. What did and does each day bring to me? How do we face each day as it is, not as we want it to be? What does the sea teach us?

When I started going to the sea I had no number in my mind, in my head. I just went to go, to face the sea, to give myself a challenge. I never thought about putting a limit on the experience. I just kept going. I didn't even keep track at the beginning. I had to figure it out when I began to keep track later by looking at photos, at the calendar, reviewing events. 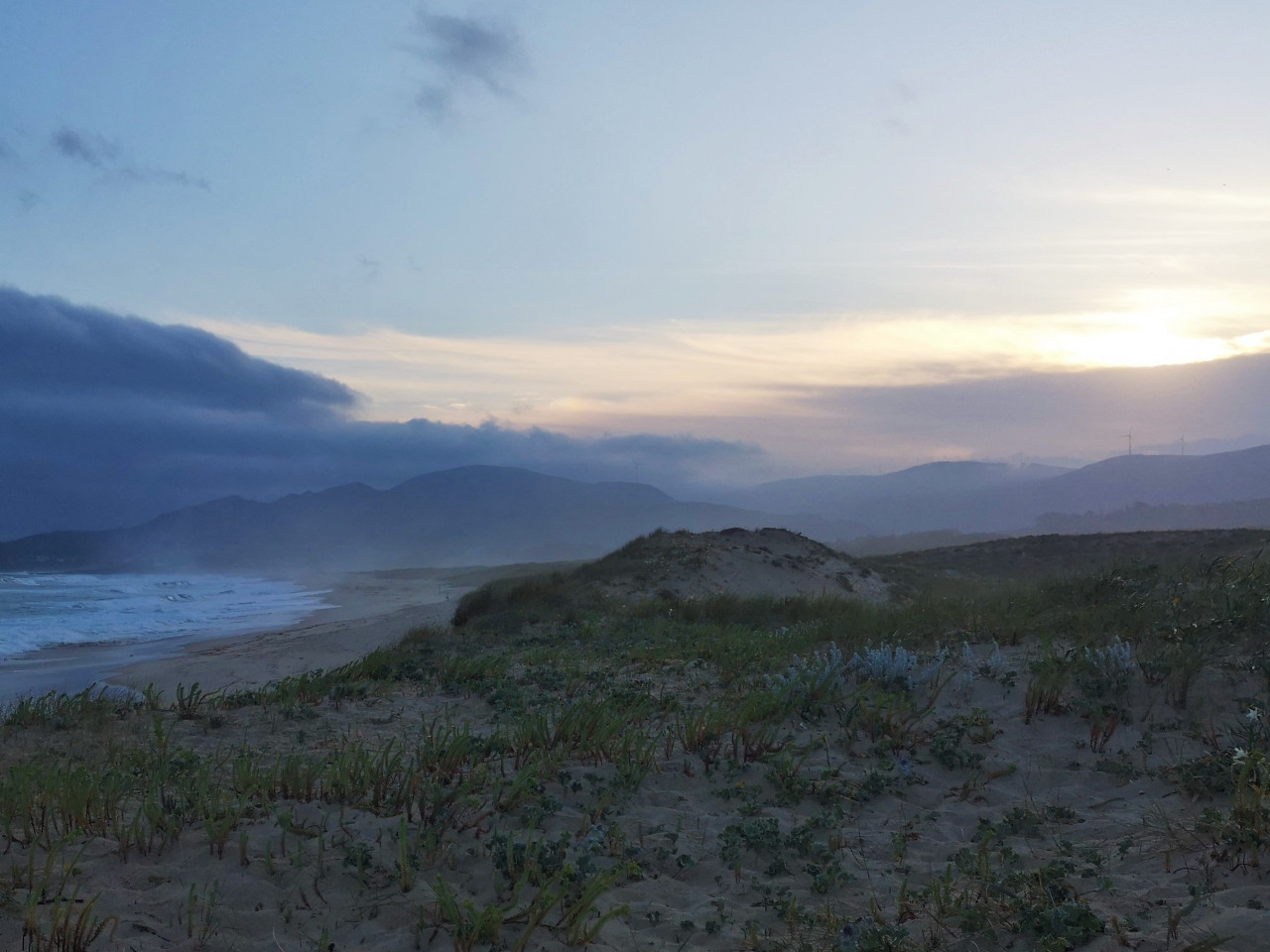 Day 100 was not a particularly remarkable day as I walked down. A weak sun hid behind a cloud bank over the familiar range that has marked my photos and experiences these many days. A long whale shaped gray cloud extended over the ocean from west to east in front of me. Even though the sun was up, it wasn't yet visible or shining its rays as I reached the beach. Cresting the dune, I could hear the roar and knew a rough sea awaited me without seeing it. I followed the footprints, both human and animal alike, drawn to the sea for their different reasons. 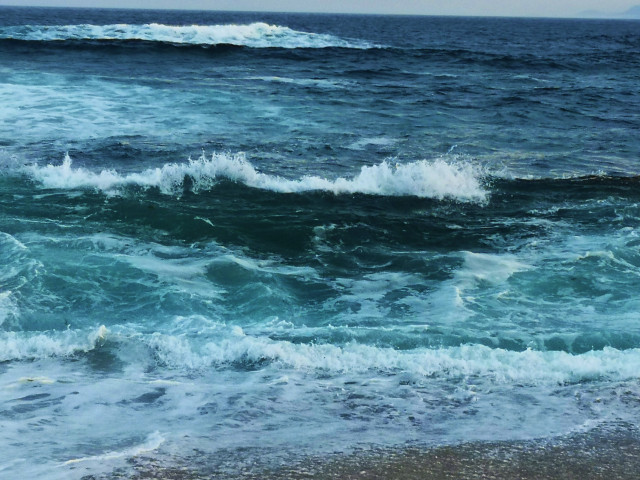 Heavy surf at the bay 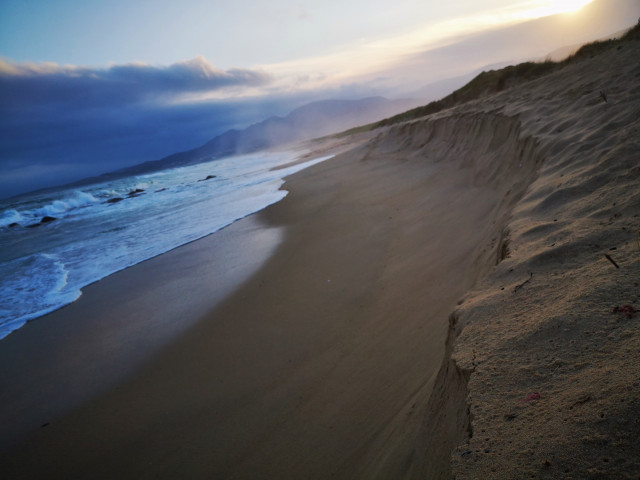 Wow! A very heavy sea at high tide. Working hard, the sea carved a large chunk of sand out of the bay and there's only a narrow place to walk. Human and little dog prints find passage along the precipice of sand. Pounding, continuous waves hungrily climb the beach reaching the edge of the sand wall with long foam tendrils reaching out to greedily take more sand down to the depths. No swimming here today! Tough, rough, spectacular sea.

Walking westward along the shore, I'm mesmerized by the beauty, strength, awe, fear, respect that the ocean provokes in me, especially on a day like today. I sense the sun rise above the clouds as I'm reaching the tide pool area, suddenly my long shadow appears on the sand in front of me and the sun glints marvelously off the wave crests. I look back and see the always breathtaking view of the sun filtering through the clouds, illuminating the wet foamy beach, the waves crashing, the mist rising off the water, and the spindrift golden in the first light of day. I pass the rocky 'Mermaid Cove' area, the tide pool area I like to visit when the sea is particularly rough or I feel like a more sedate immersion. It's very agitated as well. Today everything is extreme. Huge waves crash over the rocky barrier that protects the cove and even 'the flume' inaccessible. In my mind's eye, I imagine low tide and what a contrasting scene it presents.

I continue to the cove. Standing there I observe and analyze the long surge waves, the vibrant masses of liquid aqua being moved back and forth effortlessly up and down the sandy shore. It's not rough like the bay but there is a deceptive tranquility with a mass of power there which I don't feel an urge to test.  I watch the foam being sucked out in the rip current along the edge of the rocks and imagine myself in there being pulled along as if it were a conveyor belt. I could probably swim out and then circle back around but the swell area seems so large and the pull so great I just don't feel like taking the risk. The sea is different every day and it is important to take it as it comes, read the signs. I have no death wish, no need to prove anything. It's the place where prudence and imprudence meet. 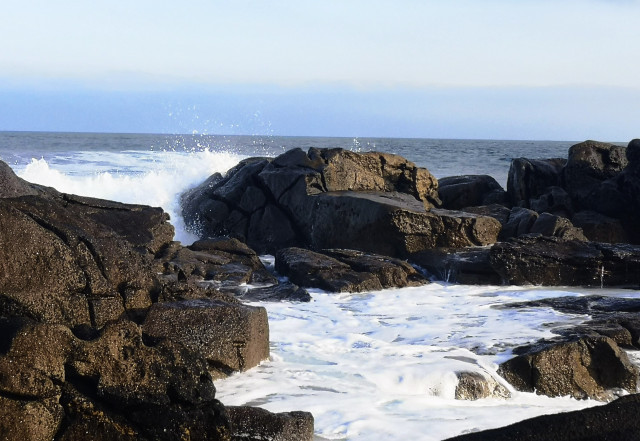 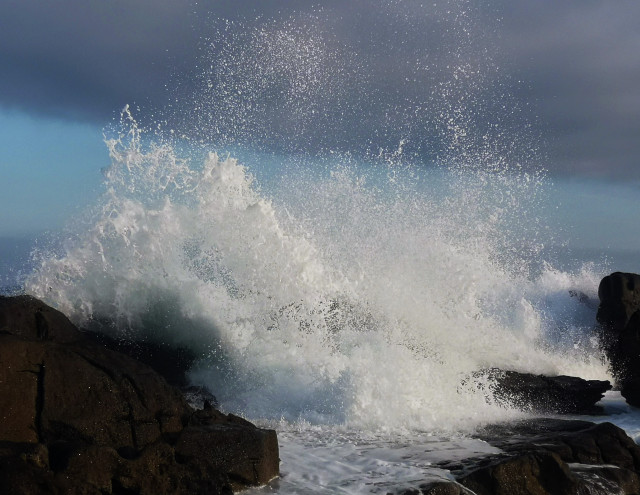 Water breaks and starts to cascade over the rocky barrier 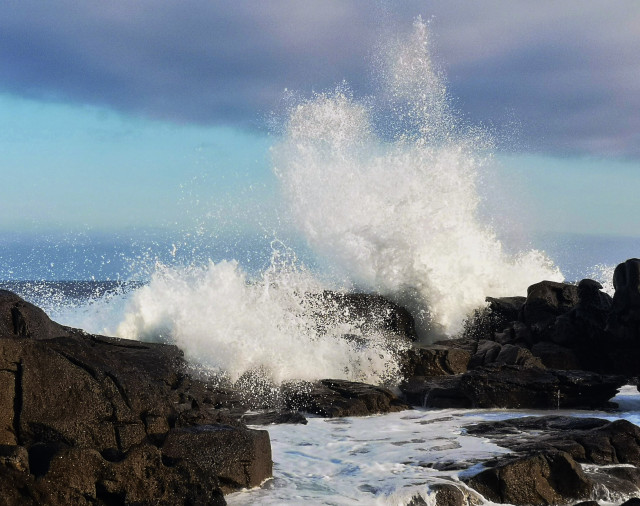 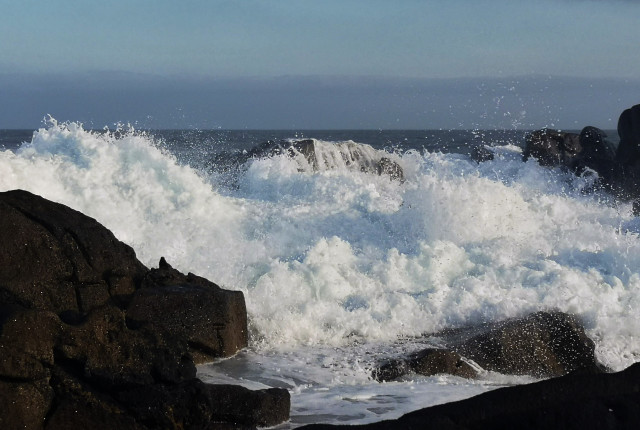 Cascading over the rocky barrier

I turn back to Mermaid Cove and the flume briefly wondering if I should push myself and go in at the cove but I'm glad I don't. I'm greeted by the pounding roar and resonant booms of the powerful high tide waves relentlessly hitting the barrier rocks full force. Mesmerized yet again. Even here I feel wariness as I analyze the powerful movement of water over what is often exposed rock. But I feel a sense of exhilaration as I undress behind the barrier rocks that protect me from the massive force just beyond them. I descend into the white foam imagining the sea as a harsh womb, a primordial, generative birth center, a place of orgasmic fury and I'm just on the edge, touching the fringes. I wade in and relish the cold, stinging water on my thighs. 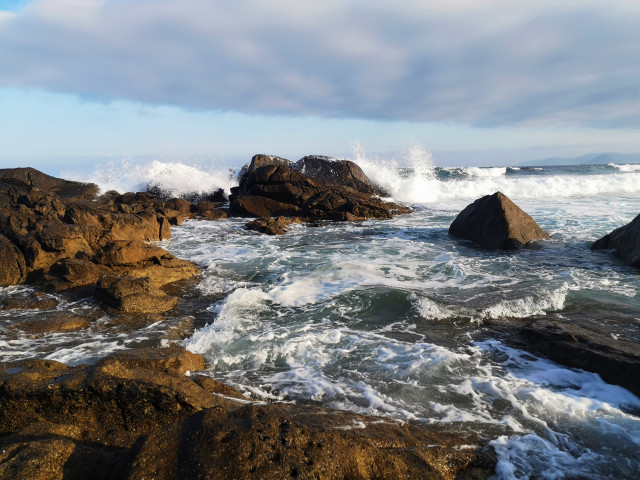 Swimming hole today at Mermaid Cove leading to the now inaccessible flume to the right where waves breaking. 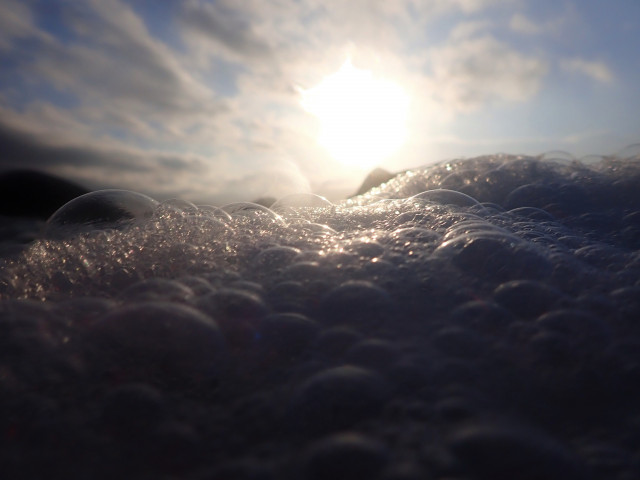 Masses of water pour over the protective rocks in front of me cascading down in a temporary waterfall. Ephemeral. Everything is ephemeral. And we are all just specks. Small but powerful waves rush in, around and behind me coming through the rocky channel which is usually just an entry point for me into the flume! I lay down floating above what I normally walk on amazed at how each day and the conditions are completely different. I feel grateful, pure sensations, focus and complete presence where I am, the sun on my face, lightness of being, freedom. Even here I get swept back and forth and could hit the rocks if not careful but I can also easily stand up. Respect for the medium. Exhilarating. Joy. Refreshing. 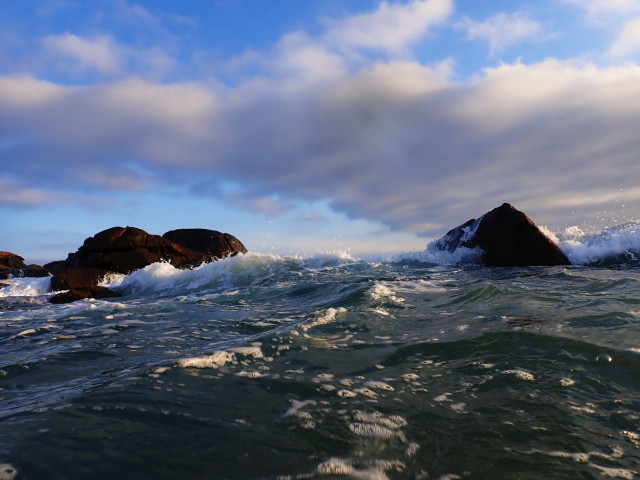 Waiting the arrival of the wall of water 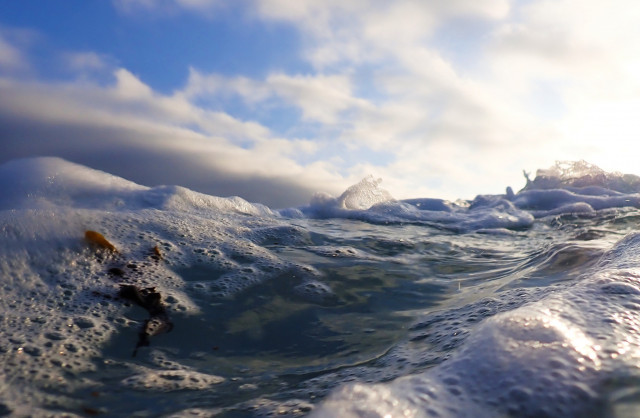 Immersed in the foam 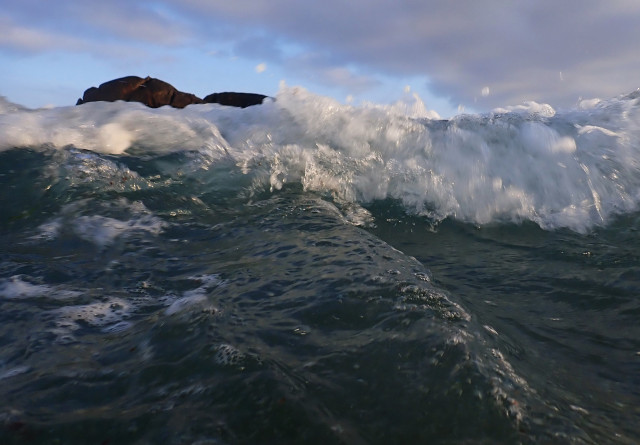 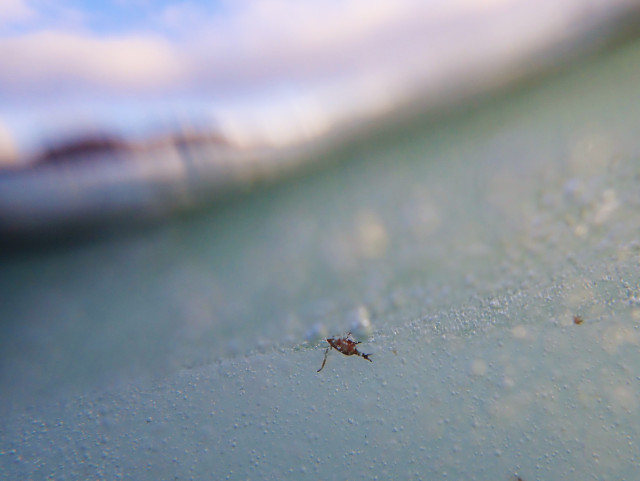 I want to capture the power and share these sensations. I get out and return. A huge wall of foam sweeps over me and all is white, foamy aqua walls surround me. Unending power. Amazing. Just want to stay in, watch, observe, feel, absorb. I have observed this morning two men at different times approach the end of the boardwalk but they don't come onto the beach.

As usual, I am alone at daybreak, free, alone, naked, wild, and happy. 100 days swimming at dawn.